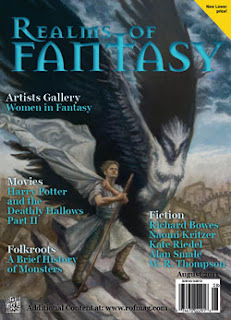 I was out of town on Monday for a job interview.  Since I had some time between the interview and having to return to the very small airport I was flying out of, I decided to visit some of the local bookstores.  Without adult supervision, of course.  (My suitcase was noticeably heavier on the return flight.)  One of the things I picked up was a copy of the August issue of Realms of Fantasy, which wasn't yet on the stands where I live.

I read part of it on the plane, and then finished it after I got home.  I was rather disappointed.  Approximately half of the magazine was devoted to fiction.  No huge surprise there.  RoF is a publication dedicated to all aspects of the genre, so the columns and reviews don't bother me.  Not all of them interest me, but I don't begrudge others the chance to read them.  And the art feature is usually worth a look and frequently a second look.  But these things alone are not why I pick up the magazine.  I buy it for the fiction.

There were five stories.  I have to admit by and large they were a let down.  Only one of them completely worked for me, and it was really more science fiction than fantasy. (Any story that opens by trashing It's a Wonderful Life is one I'm going to be predisposed to like.)   W. R. Thompson, whose work I've enjoyed in Analog for years, had a deal-with-the-devil story that started out promising, with wit and humor, but ultimately left me unsatisfied.  I found the mechanism by which the narrator got out of the deal to be a cop-out.  The story following it, a retelling of the Biblical story of Lot, with Lilith thrown in for good measure, contained many of the ideas and themes the Thompson story did.  Since these two pieces together constituted almost half the fiction, I thought this was a bit too much of the same thing, a feeling not dissimilar to the one I've gotten at the movies after I've gone back for the free refill on the large buttered popcorn.  I should've stopped after the first.

So rather than give a breakdown of the contents and what I thought of each individual story, what worked and what didn't, like in my two previous reviews, I'll just pass this time.  None the stories were poorly written.  In fact, the way the words were put together in this issue constituted some of the best writing I've seen in the magazine, from a technical perspective.  For the most part, there was better emphasis on characters and story rather than pretty words than in the previous issue.  It's just that most of the stories really weren't the type of thing I'm interested in reading.  Only the riff on Lot could really be considered adventure fantasy, and I didn't care that much for some of the themes, in part because they were so similar to the previous story. And while I like other kinds of fantasy besides sword and sorcery and adventure fantasy, most of the selections in this issue really didn't work for me.  Well written pieces, but not my cup of tea.  Which is why I decided not to review the issue.  I don't see any point in doing what would essentially be trashing the magazine because the stories weren't to my taste. If they had been poorly written or had protagonists who weren't believable as characters, I would have a different attitude.

I write these reviews in part to recommend things I think my readers will like.  That's tough to do when I didn't care for most of the stories solely on the grounds of personal taste.

On the positive side, the price has come down without any decrease in production values, a move that is appreciated.  I suspect this is a move to increase sales.  I hope it works.  Now if I could just get an electronic version in epub format.  There was an ad saying it was available, but the website only shows pdf versions of the current issues.
Posted by Adventuresfantastic at 9:51 PM

Email ThisBlogThis!Share to TwitterShare to FacebookShare to Pinterest
Labels: It's a Wonderful Life, Realms of Fantasy