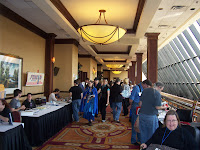 Fencon IX was held in Dallas over the weekend (Sept. 21-23).  I thought it was a great success.  Of course my definition of success is pretty simple.  I had a good time.  In spite of some friends and/or regular attendees not being able to make it this year.

I arrived at the hotel on Friday afternoon after a long drive.  The first two panels I attended were slideshows by the artist guest of honor, Donato Giancola.   In the first slideshow, he discussed how he became interested in art in general and how he came to do paperback covers.  The second slideshow was more about how the Old Masters and some of the modern 20th century artists influenced him.  There was some overlap between the two programs, but both were worth attending.  Some of the paintings he showed were from a series he jokingly called Dead Things on the Beach.  Many of these haven't been published, and they were some of my favorites.  One that has been published is the cover of The Golden Rose, by Kathleen Bryan.  That's it on the right.  You can see what the original painting looks like here.

Toastmaster Peter David did a great job on the opening ceremonies, throwing toast into the audience.  At least until a piece landed inside one of the large bowl light fixtures.

I made a run to Half Price Books later that night with a box of items, mostly duplicates from small presses that I'd gotten in some grab bag sales, but a few things my wife wanted to get rid of.  They offered me $30.  It was to laugh.  I thanked them, kept the books, and got considerably more (much more) than that in trade credit in the dealer's room for about half of what I had in the box.  (Thanks Willie and Zane.)

When I got back to the hotel, I hung out in the hall outside the con suite and listened to astronaut Stanley G. Love tell what all he went through to get into the astronaut program.  There were some room parties that night which I visited, then went to bed.

I bounced around several panels Saturday morning, then at noon attended Brunch with Barbarians, a joint reading between Mark Finn and Heroic Fantasy Quarterly editor Adrian Simmons.  The pieces they read were good, and so was the spread.

More panels and signing that afternoon, along with a nap and dinner with Finn and Simmons.  The panel on the future of space exploration was packed, with folks (including me) standing at the back.  Special guest Karl Schroeder moderated a great panel on what science will look like in the far future.  I missed a great deal of GoH C. J. Cherryh's address, but what I caught was fascinating.  She was speaking on how climate change has affected empires over the historical record.  I missed most of the events with the other guests.  I usually spend some time listening to the musical guests, but this year I was pretty much otherwise occupied.  (That's one of the things I love most about Fencon, the music track.)

The maintenance people were working in the room across the hall from me and set off the fire alarms.  The entire convention evacuated long enough to get outside and come back in.

At 5:00 that afternoon, there were a launch party for a benefit CD in the con suite.  The CD is Cath, and the proceeds go to the Michael J. Fox Foundation.  It's Celtic music, probably my favorite genre, and some of my favorite artists perform on it.  You can hear samples by clicking the above link.  Melissa Tatum did a great job of putting this one together.

That evening I mostly hung at parties and visited with friends.  I'm getting way too old to be staying up past midnight, I'm discovering.

Sunday had another full slate.  Donato was supposed to do a live portraiture demonstration, but he had to leave early.  The two highlights of the day were the Phineas and Ferb panel (yes, yes I did attend) and the panel celebrating 80 years of Conan.  If you aren't familiar with Phineas and Ferb, you're missing out on some of the most intelligent and creative science fiction cartoons around, one that not only gets geek culture, but treats it respectfully.  If you don't believe me, just watch the episode set in a science fiction convention.  Members of the panel and audience displayed great taste in fashion, as you can see in the picture.

The Conan panel was the last one I attended, with good and thought provoking discussion.  Mark Finn maintained that Conan was something of an anomaly in Howard's work in that Conan was created for a specific market, namely Weird Tales.  He says that the way women were portrayed in most of the Conan stories (Belit and Valeria being exceptions) was intended to appeal to editor Farnsworth Wright and get on the cover (and thus get paid more).  As a counter-example of Howard portraying strong women, he and some of the other panelists pointed out "Sword Woman".  That was a good way to end the convention.  Not wanting to leave, I reluctantly drove home.

It was a great convention.  I'm looking forward to next year, although I'm not sure how big the convention will be.  Worldcon will be held less than a month prior, and it will be in San Antonio.
Posted by Adventuresfantastic at 9:10 PM