Looking on Beauty and Death 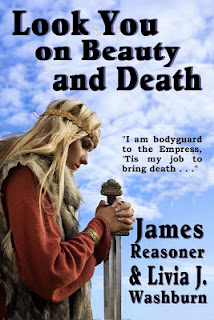 This just became available today.  After grading exams all day, I needed a nice diversion.  This sword and sorcery tale by a long time husband and wife team was just the ticket.

It was originally published in New Amazons, edited by Margaret Weis.  Reasoner and Washburn have touched it up and made it available again.

It's the story of Ralna, personal bodyguard to the Empress.  She's called back to the mountain village where she grew up for her younger sister Mardith's wedding.  It seems a wizard has come over the mountains, and among other things, he was to marry Mardith.  The feeling is not reciprocated.  The family needs Ralna to handle the situation.

I won't go into any more details regarding what happens.  This is a short story, after all.  Rather I'll talk about my reactions to some things.  First, the wizard Grond, isn't your stereotypical wizard.  He's not totally evil, although he's not exactly a nice man either.  He has some good intentions if he can get past his overdeveloped sense of self-importance.

And Ralna isn't without her character flaws.  She's a drama queen of sorts, and likes to play to the crowd and make bombastic statements.  She also has something of a chip on her shoulder towards the in village in which she grew up.

Probably the most admirable character is Mardith, who may be the most clever and admirable of the three.

This story didn't go in the directions I was expecting.  When I thought I knew how the conflict between Ralna  and Grond would turn out, it went in a different direction.  Reasoner and Washburn did some deft turning of stereotypes of their heads.

Washburn is a noted historical and mystery writer.  Reasoner is best known for his westerns and historicals, although he's got a nice body of crime fiction as well.  (I especially enjoyed the short noir novel Tractor Girl.)  They've written collaboratively and individually.  And of course, they write across a number of genres in short fiction, having contributed to Cross Plains Universe (reviewed here).  Reasoner has written enough science fiction to fill a collection (reviewed here), and I wish he would write more. He said in the blog announcement of "Look You on Beauty and Death" that he has a fantasy novel in his files that needs a bit of work, but that he intends to publish as an ebook.  Maybe if we bug him enough...

Anyway, if you're looking for a quick read, especially a quick S&S read, give this one a try.
Posted by Adventuresfantastic at 10:13 PM