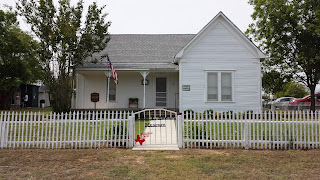 I've been attending Howard Days for approximately a decade now.  I think this was the most enjoyable one of all.  The weather couldn't have been better.  It was unseasonably cool, so much so that I never worked up a sweat.  Joe Lansdale was the surprise guest, and he really added to the experience.  I got to meet a reader of this blog I'd not met before (Hi, John!), renewed some friendships, and had a fantastic time.

I'll break this post up into parts for a couple of reasons.  First, I don't think I can get everything written tonight.  Second, I've got a lot of pictures, so I'm going to break things up to keep the post from getting too long.

The official events started on Friday, but there's always an informal kickoff dinner at a steak restaurant in Brownwood.  This was the first year I'd managed to make that part of the weekend.  Robert E. Howard is buried in Brownwood alongside his parents.  I'd not visited the grave before; I've always stayed at my parents' house for Howard Days and they live an hour in the opposite direction.  So I made sure I had time before dinner to swing by the grave site and pay my respects. 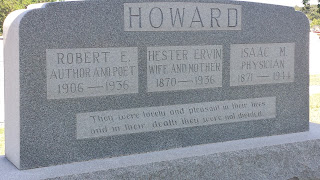 Then off to dinner.  The food was good, and there were over two dozen people there, scattered over at least 5 tables.  I was at the largest, and as in any gathering of Howard fans, the conversation was far ranging.  Among the topics discussed were movies, the differences between male and female Howard fans (Ain't opening that can of worms here; ya had to be there.), comics, auto repair, and the food.  We also got to see two recently uncovered photos of Howard that haven't been published yet, although there's some uncertainty about whether one is really him.  After dinner, people split up.  Some went to back to Cross Plains to the Pavilion while others went to the cemetery.  I went back to the cemetery with that group.  That's most (but not all of them) in the picture. They are (l. to r.) Lee Breakiron, Jeff Shanks, Deuce Richardson, John Bullard, Tim Arney, Al Harron, Barbara Barrett, Bill "Indy" Cavalier. 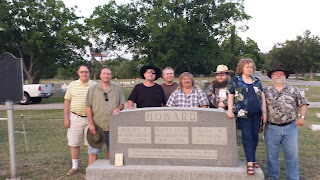 Greenleaf Cemetery is one of the old style, elegant cemeteries you don't see much of anymore.  There are a lot of tombstones, small statues, and obelisks, but not too many of the flat markers meant for lawn mowers to run over.  It was a peaceful place.

After visiting the Howards' gravesite, we stopped at Tevis Clyde Smith's grave.  It was getting late by the time everyone left.  While I would have liked to have gone back to the Pavilion and socialized, I went on home and got some sleep. 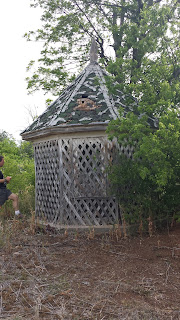 The next morning, I made it down to the Howard House just as the tour was starting.  The tour varies every year so that it's not the same thing all the time.  This year, local historian Don Clark (who always does an outstanding job) took us to the nearby communities of Cross Cut and Burket, where the Howards lived before moving permanently to Cross Plains.  There's not much left of either town, although in the early part of the century they were both boom towns.  We saw the gazebo in Burket where Hester and her young son would read together.  The house is gone, the gazebo being all that remains.

We drove back to Cross Plains, and I visited the House, bought some items in the gift shop, and head downtown to the library for the first of the panels.  The morning panel consisted of Al Harron, GOH Tim Truman, Jeff Shanks, and Mark Finn discussing the history of REH in the comics.  It was extremely educational.  I didn't know that Conan's first comic appearance was in the 1950s in a Mexican comic.  Conan was blond and was a supporting character.  The main character was Belit.  The comic was titled La Reina de la Costa Negra (the Queen of the Black Coast).  The comic ran for a number of years in two formats.  Not much is known about it.  When the panel was done, I headed off to lunch (fresh grilled chili dogs) at the Pavilion.

I'll discuss the other panels and the rest of the events in the next post.  For now I'll leave you with some pictures.
Posted by Adventuresfantastic at 12:10 AM