A Look at Beneath Ceaseless Skies #109

I'm trying to get caught up on periodical reading before diving back into some novels.  It's been a while since I looked at Beneath Ceaseless Skies.  BCS is one of the best publications for short adventure fantasy out there.  I try to read every issue, even if I don't review all of them.  I'm a little behind right now, but I hope to get caught up during the Christmas break.

Anyway, the latest issue is live, so let's look at it.

Read more »
Posted by Adventuresfantastic at 11:47 AM 2 comments:

A Quick Look at the Second Issue of Nightmare Magazine

I realize that November is almost over, and the new issue of Nightmare will be out in a matter of hours, at least if you have a subscription.  So I'm behind for the month.  Like you aren't?

Anyway, I wanted to take a look at the second issue since the first was a little different.  It contained four pieces of original fiction.  Starting with the current issue, Nightmare will run two original stories and two reprints.

So let's take a quick look, shall we?

Further Thoughts on Traditional Publishers Getting into the Self-Publishing Business

In my brief post earlier today, I mentioned that Simon and Schuster has started a self-publishing division run by Author Solutions, an entity with a reputation for screwing authors.

I wanted to inflict upon you share a few further thoughts with you on the matter.  Why would a major publisher want to start a self-publishing division?  The obvious answer is money, of course.  Which makes all the noise about traditional publishers ensuring quality, curating culture, and defending literature all the more obvious as the load of horse pucky it is.

David Gaughran did an excellent job on summarizing why this venture is a bad thing for writers.  I'll not repeat what he said here.  For one thing, this isn't an echo chamber, and for another, I doubt I could say it as well as he did.

Instead, I want to speculate on how this might come back to bite Simon and Schuster in the ass, and what serious writers can do to make that happen.

I know some of you who read this blog are either indie authors or intending to be.  David Gaughran posted a warning on his site earlier this morning that I think bears repeating.  In short, Simon and Schuster has started a self-publishing arm.  But they aren't running it.  Author Solutions is.  This is an outfit to avoid like the proverbial plague.

Here's the link to David's post.  If you are an independent author or plan to be one, check it out.  He summarizes why this is a scam and provides pertinent links for those who want more detail.

I"ll have more to say about this later.

Posted by Adventuresfantastic at 10:26 AM 3 comments:

A Review of Queen of Thorns by Dave Gross

I'd not read any of the Pathfinder Tales before, so I wasn't sure what to expect with this one.  Add that this is the third novel featuring these characters, and I could have found my self at a disadvantage.

Fortunately, Dave Gross, whose work I hadn't read prior to this novel, does a good job of filling in what background details are needed as you go along.

The setup starts out fairly straightforward.  Half-elf Varian Jeggare has never met his Elven father, but at one point in his life his father sent him a gift of a red carriage.  That carriage was smashed in a previous adventure.  Now he and his bodyguard Radovan have journeyed to the Elven kingdom of Kyonin hoping to find the carriage maker and get the thing repaired.  Simple, right?

It's been a while since I looked at an issue of Heroic Fantasy Quarterly (here and here), so we need to rectify that.

The current issue went live last month.  I'm a little behind on my magazine reading, but I'm catching up.  The problem is that there's so much quality short fiction being published online.

HFQ is no exception. Here's what the current issue holds.

Read more »
Posted by Adventuresfantastic at 10:16 PM No comments: 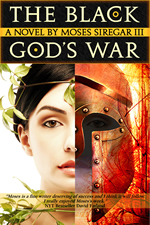 In Which I Encounter Rogue Angel

I'd seen the Rogue Angel series around for about a year or two but until the other day, I'd never read one.  A couple of months ago, the author of this one sent me a review copy.  It was on the list to review before the end of the year, but when I ended up flying to Houston for a couple of days earlier this week, I decided to move it up.  This required me to rearrange the order in which a few books would be reviewed, but I was okay with that.  This way I could ignore shrill flight attendants who demand that "anything with an 'off' switch must be turned off, not put in airplane mode, turned off" and simply read.  If I'd had only my ereader, we'd gotten stuck on the tarmac, and I wouldn't have had anything to read at all.

Except for one thing, which I'll discuss below, I enjoyed the book.

The set up for the series is fairly simple.  It concerns one Annja Creed, who's part Indiana Jones, part Lara Croft, part Kolchak the Night Stalker, and part Duncan MacCleod (of the Clan MacCleod).  She's an archaeologist who is cohost of a tabloid TV show called Chasing History's Monsters.

She also has the sword of Joan of Arc.  This is a magical sword which she can literally pull out of thin air whenever she needs it.  I want one of these!  (That's not a hint for those of you wondering what to get me for Christmas, but if  you're so inclined....  I'm just sayin'.)

Before I read Outcasts, I wasn't familiar with the name Nick Wisseman.  Nor was I familiar with venues where these stories first appeared, places such as Bewildering Stories.  It's a name I'm going to remember, though.  And I'm going to check Bewildeirng Stories out.  If everything they publish is this good, I'm going put that venue on my regular reading list.

When Mr. Wisseman emailed me and asked if I would be interested in reviewing his book, I said yes.  I've written before that taking a chance on an unknown author is a gamble.  Sometimes it's not a gamble that pays off (and you usually won't see the results of those gambles written about here).  Other times, you hit the jackpot.  Books like this one are why I review self-published authors I've never heard of before.

Here's what you get in this collection: 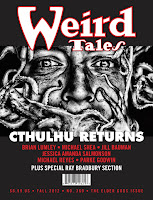 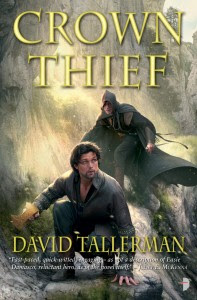