The last couple of days have been hectic, so I'm a little late in posting this, but yesterday marked the centennial of the birth of one of the greatest science fiction and fantasy authors of all time, Catherine L. Moore.

Although her writing was primarily collaborative after she eventually married fellow author Henry Kuttner, with whose works readers of this blog should be familiar, Ms. Moore was a major author in her own right.  In fact many critics and historians of the field consider her to have been the better writer of the pair.  Indeed, her work is more poetic and shows more emotional depth than Kuttner's solo work.

After Kuttner's death, Moore wrote no more fantastic fiction.  I'm not sure why, although I've heard it was because her second husband didn't approve of science fiction and fantasy.  Whether this is true or not, I can't say.  I have difficulty believing the woman who gave us Jirel would ever go along with that kind of restriction.  Whatever the reason, as much as her "retirement" was a loss to the field, her influence is still being felt.

Her first published story, "Shambleau", introduced Northwest Smith, a (superior) forerunner to Han Solo in the November 1933 issue of Weird Tales.  This was the first of a number of tales featuring the space adventurer, although to call them science fiction is a bit of a stretch at times due to the fantasy elements they often contain. 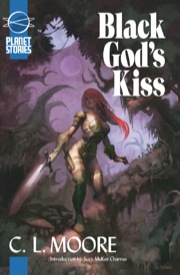 Moore's next series character was Jirel of Joiry, the first warrior woman of sword and sorcery.  Jirel could give the men a run for their money in the fighting department, and usually did.  Both the Northwest Smith and the Jirel stories are in print, as are collections of her solo fiction and her collaborative work with Kuttner.  Given the versatility of her work, you should probably check out more than one volume just to get a good feel for Moore's talent and range as a writer.

I plan to look more in depth at the Jirel and Northwest Smith stories here, but those posts are some time in the future.  Until then, check out these tributes by Ryan Harvey and C. S. E. Cooney.  Better yet, read some of C. L. Moore's work as well.
Posted by Adventuresfantastic at 10:50 AM