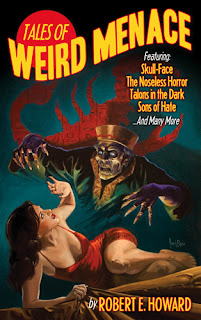 Tales of Weird Menace collects the, what else, weird menace stories of Robert E. Howard.  The centerpiece of the volume is Skull-Face.  Since I've written at length about that tale,we'll go on to the second.

This is "The Noseless Horror".  It's a brief tale, and in the interest of fair warning, I should tell you I'm going to include spoilers in this discussion.  The plot is pretty simple.  The narrator, called only Slade, and John Gordon are spending the night at the isolated country manor of Sir Thomas Cameron, noted Egyptotologist.  Whether this is the same John Gordon who has such a prominent role in Skull-Face isn't clear, but it's highly  unlikely.  This Gordon is described as a wealthy sportsman, whereas the Gordon of Skull-Face is a government agent. The only other person at the house is the Sikh servant Ganra Singh, who lost his nose to an Afghan sword.  There's also a Ganra Singh in Skull-Face, but he's not the one here.  The descriptions and backgrounds are too different, plus the Ganra Singh in Skull-Face still has his nose intact.

Much of the conversation revolves around Sir Thomas tricking a rival, Gustavve von Honmann, with a phony map.  As a result of following the map, Von Honmann was killed by a tribe in central Africa.  According to the one porter who managed to escape, he vowed he would have revenge on Sir Thomas, from this side of the grave or the other.  Sir Thomas isn't frightened, and moves the conversation to the real reason he had asked the men to his home.


Sir Thomas tells Gordon and Slade that he is about to announce a major find and wants their input on some details first.  The find concerns a mummy found in the hinterlands of Upper Egypt that was embalmed in an unusual way.  None of the internal organs were removed.  As Slade and Gordon are preparing for bed, they hear a scream from Sir Thomas' study.

They arrive in time to hear Sir Thomas' final words, "Noseless--the noseless one", before he falls over dead with a dagger in his heart.  Ganra Singh joins them minutes later.  Of course, Gordon immediately accuses Ganra Singh of the murder despite the fact that Ganra Singh's clothes are not disheveled nor is there any blood on them.  Slade is not so sure of Ganra Singh's guilt, and Gordon, after locking Ganra Singh in another room, agrees to consider other possibilities.

Slade searches the house while Gordon stays in the study to look for clues.  He actually says that.  Up until this point, the story reads like a combination gothic/English country house mystery.  It's not until Slade is returning to the study after finding an empty mummy case in Sir Thomas' private museum that he spies the shadow of Ganra Singh on the wall.  Slade is terrified and understands something of what could have driven Sir Thomas mad just before he died.  At this point, we're back in familiar Howard territory, more of a horror story than a weird menace in my opinion.

While Slade was searching the building, both men heard a crash and assumed it was caused by the other.  They investigate to find that Ganra Singh has escaped.  After searching the building, they see a light coming from under Ganra Singh's room.  How they know this to be his room is not explained.  The light is caused by roaring fire in the fireplace.  Inside Gordon and Slade discover not Ganra Singh but the missing mummy, which, like Ganra Singh, has no nose.  The mummy attacks, shattering Slade's shoulder, and is in the process of breaking Gordon's back across a heave table when Ganra Singh shows up.  By his own brute force Ganra Singh is able to shove the mummy into the fire, destroying. Gordon responds by fainting.

While Ganra Singh is binding Slade's wounds, we learn that Ganra Singh escaped in order to prove his innocence and find the true killer.  Gordon apologizes for doubting him and gives him one of the highest compliments possible in Howard's fiction, calling him "a real man."  Gordon tells the other two men that the mummy wasn't found in the hinterlands of Egypt, but instead Sir Thomas brought it back from much closer to the center of the continent, on the edge of the territory where Von Honmann was killed.  As the mummy burned in the flames, Gordon saw its face change to Von Homann's.

This story works, although it's not one of Howard's best, and it works primarily because of Howard's ability to tell a tale.  It begins as an apparent attempt to be either a detective story or a traditional country house mystery.  The "mystery" is entirely too predictable.  About halfway through the tone changes and becomes one of creeping horror and then action, things Howard excelled at.  It's at the end, when Gordon is explaining things, that Howard returns to the form of a traditional mystery, in which the detective explains to the remaining suspects how he deduced who dunnit.  Howard attempted some detective and mystery stories, but he never really felt comfortable with them.  Often he would introduce elements of the genre he was trying to write into a genre story he was comfortable with.  As an example, one of the early Conan stories, "The God in the Bowl" is a police procedural in a fantasy setting.  This looks like an attempt on his part to mix horror with mystery/detection.

A popular pastime, usually among the uninformed but occasionally among people who should know better, is to criticize Howard for his approach to race.  This story is a perfect example that such individuals don't have a clue what they're talking about.  The narrator refuses to accept  that the nonwhite character is automatically the killer, instead wanting to see proof, and tries to find evidence to clear him.  Furthermore, Howard makes him the real hero of the story, saving the lives of the white guys.  What's racist about that?  Nothing; in fact it's remarkably progressive for its time.  Gordon displays the typical racial attitudes for a man of his day.  He not only gets shown up for it, he's also the only one who faints, and then later apologizes for his attitudes.

One thing bears considering here, and that's the similarities between "The Noseless Horror" and Skull-Face.  Both have strong heroic characters named John Gordon.  Both involved evil beings with grotesque appearances found in mummy cases.   Both have Sikh characters named Ganra Singh, although the two Sikhs are clearly not the same person.  I don't know when "The Noseless Horror" was written nor have I had any luck in finding a probable composition date, but my guess, and this is only a guess, is that it precedes Skull-Face in composition.  It wasn't unusual for Howard to play around with variations on different characters names.  He may have tried out the names in "The Noseless Horror" before going on to write Skull-Face. Certainly the latter is a more polished and ambitious work.  And it would make no sense to give characters in a later story the same names as characters in a published story when those characters aren't the same individuals.

I don't know if Howard submitted "The Noseless Horror" anywhere or not.  In a letter to Tevis Clyde Smith written sometime in February 1929, Howard provides a list of most of the stories he had submitted up to that time [Collected Letters, vol.1, 1923-1929, REH Foundation Press, pp. 306-312].  "The Noseless Horror" isn't listed, although Skull-Face is.  In the letter Howard mentions that he left out "four or five stories" plus a number he didn't finish or submit.  I suspect "The Noseless Horror" was among these.  That would certainly be consistent with the suggestion Howard wrote "The Noseless Horror" for prior to Skull-Face and never submitted it anywhere.  It wasn't published until 1970 in the February issue of the Magazine of Horror.  If anyone does know when this story was written, I'd appreciate your letting me know.

"The Noseless Horror", like I said, isn't one of Howard's best and may very well have been an unsuccessful experiment in writing in the vein of an English mystery.  Unsuccessful in terms of its being that type of mystery.  Still, it's worth a read and no matter what it attempts to be, it succeeds as an entertaining yarn.
Posted by Adventuresfantastic at 9:51 PM