It's been a while since I've done one of the Long Looks at Short Fiction posts.  Far too long a while.  A few weeks ago I reviewed The Cloud Roads by Martha Wells and griped a little bit about having to wait on the order of a year before the sequel is published.

I really enjoyed the world Wells created and have wanted to see more of it since before I finished the last page and closed the book.  Fortunately, I have.  On her webpage, Martha Wells has made available a selection of novel excepts and short stories.  You should really check some of them out.  One of them is entitled "The Forest Boy", and it's a prequel to The Cloud Roads.  In that book we learned that the protagonist, Moon, had been orphaned as a young boy.  Because of his ability to shape shift, he was never able to settle down and find a home, instead continually being forced to leave because of the fear his other form caused the people around him. 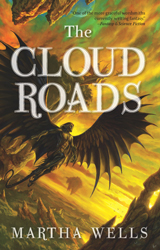 In "The Forest Boy" we get to see an episode from Moon's early life, one of the attempts he made to find a home and acceptance, and how jealousy drove him from it.

Instead of making Moon the viewpoint character, Wells has chosen instead to tell the story from the point of view of Tren.  Tren is one of six foster children adopted by Kaleb and his wife Ari.  The settlement where they live is along a trading route called the Long Road, and the children are primarily those abandoned along the road.

Tren and his foster sister Lua are searching the settlement's midden when they discover Moon caught in a trap.  They get Kaleb, who frees Moon, takes him home, and oversees his recovery.  Moon is accepted into the family without question.

During the course of his recovery, Moon and Lua become quite close.  Since Tren had assumed he and Lua would one day be married, Lua's growing relationship with Moon naturally causes problems.

That's all I'll say about the plot.  The story is a character driven one, not an action tale, although there is one fight scene near the end that was well done.  The choice to use Tren rather than Moon as the viewpoint character was a wise one.  If the story had been told by Moon, it would have simply rehashed things told in The Cloud Roads.  Instead, by focusing on a character who isn't seen in the novel, and probably won't ever be again, Wells breaks new ground by giving us a detailed look at the impact Moon has on the lives of the people he encounters.

Adolescence can be a turbulent time in the life of a person, and Wells shows in a few thousand words just how difficult and unsettling such a time is.  Tren's feelings are complex, and even as he knows many of his feelings are unfounded and irrational, that doesn't stop him from having them.  Or of despising the jealousy he feels even as it grows.  The ultimate lesson Tren learns, that things aren't always what they seem, and that the people we envy often envy us for the things in our lives we take for granted, is a bitter lesson.  It's one of life's most powerful lessons, though.

Not only is Tren a fully developed character, but so is Lua, even though her character is revealed indirectly, through her words and actions, and not her thoughts.  Kaleb and Ari are shown to be loving, caring parents, even though they don't get much stage time.

Finally, I found the descriptions of the round-trees and the brief mentions of the forest fauna lent an air of exoticism to the story reminiscent of the best ecology building of James H. Schmitz or Alan Dean Foster.  With only a few lines, I was transported to another world, different yet at the same time familiar enough that I could relate to it.

I still haven't figured out if this series is ultimately going to turn out to be fantasy or science fiction, and at this point, I really don't care.  I see elements of both, but that could be my training as a scientist imposing an order that may not be there.  It's a fascinating world no matter how the stories are classified.  I'm looking forward to seeing more of it.
Posted by Adventuresfantastic at 11:58 PM