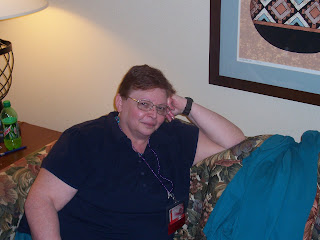 Lee Martindale is a renaissance woman in the worlds of science fiction and fantasy, wearing multiple hats, including writer, editor, publisher, mentor to new writers, convention guest, and filker, just to name a few.  She makes multiple convention appearances every year, often accompanied by her husband George, so if she’s at a convention near you, stop and say hello to her.  Recently at ConDFW, Lee sat down with Adventures Fantastic to discuss writing, publishing, her new book (reviewed here), and other interesting topics such as her preferred weapons.  Interviewing her was a blast.  I’ve known Lee for more years than either of us is willing to admit, so there’s more back and forth between interviewer and interviewee than in previous interviews I’ve run.  Here’s what she had to say.
AF:  What got you into writing and why science fiction and fantasy?
LM:  That’s a good place to start.  What got me into writing was being raised by a grandfather who was probably one of the best oral storytellers I’ve ever heard.  He was Irish – it’s genetic – and I grew up pretty much learning the craft at his knee.  I started crafting my own stories before I learned how to write.  And there was, until a tornado took out my house in 1974, a pencil-on-lined-yellow-notebook-paper romance novel hidden away.  Thank God, it ended up in Oz or I’d still be living it down.  I started writing nonfiction and selling it when I was 30.

Lee's website is here and her blog is here.
Posted by Adventuresfantastic at 11:14 PM