A Review of Dreams in the Fire 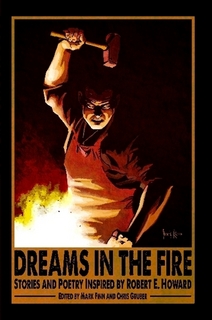 Ever since I interviewed Mark Finn back in February (posted here and here) and he told me about this book, I've had high expectations for it.  It did not meet my expectations.

This book exceeded my expectations, and in spades.

All the contributors are either current or former member of the Robert E. Howard United Press Association.   The anthology is a fund raiser, and I'll talk more about that at the end of the review.

The book contains stories and fiction, along with an introduction by Rusty Burke.  Several professional writers are included, but not all of the names will be familiar.  My understanding is that some of the contents are the first published fiction of some of the contributors.  I can only ask:  What took you people so long?  There's not a dog in the book, and the quality of many of the stories surpasses a lot of what's in professional short fiction markets these days. Howard wrote in a variety of genres, so not all of the entries are fantasy, although most are.

I'll not discuss the poetry, since some of the pieces are only a few lines.  I don't want my commentary to be longer than what I'm commenting on.  I restrict myself to saying the following people have one or more poems in the book:  Barbara Barrett (3), Frank Coffman (2), Danny Street, Amy Kerr, and Don Herron.

The backbone of the anthology is the fiction, and that's what I want to discuss here.

Charles Gromlich opens the book with a deadly tale of family and gender politics in "A Gathering of Ravens"; this one annoyed me because I wanted to know more about the relationship between Trajan Vittus and Jedess than Gromlich chose to show.  That's a sign of good writing.  Veteran professional James Reasoner examines the relationship between the pen and the sword in "The Rhymester of Ulm", while "The Word", by Rob Roehm, is the only western tale.  Robert Weinberg lightens the mood with "CSI:  Kimmeria".  Christopher Fulbright gives us a pirate yarn set on the "Bloody Isle of  the Kiyah-rahi", and Jimmy Cheung's "Avatar" is a twisty tale of betrayal.

The second longest story and one of my favorites, "Now With Serpents He Wars" by Patrick R. Burger, ventures into territory not much explored by Howard, the Arthurian legends.  I found this one to be fresh and original, with compelling writing and believable characters.  I'm hoping this one will be on one or more award ballots next year.  Oh, and if you don't like snakes, this one will probably get under your skin.

Angeline Hawkes' series character, the Barbarian Kabar of El-Hazzar, puts in an appearance in "Two Dragons Blazing".  Co-editor Mark Finn gives us a something of a boxing tale with "Sailor Tom Sharkey and the Phantom of the Gentleman Farmer's Commune."  David A. Hardy descends into madness with his "I am a Martian Galley Slave"; or does he?  Co-editor Chris Gruber, with the longest of the selections and another personal favorite, tells the story of an Indian massacre and its aftermath on the Illinois frontier during the War of 1812, with a dash of horror thrown in for good measure in "Dead River Revenge".  Gary Romeo tells of a swordsman who has "No Other Gods", and Morgan Holmes rounds out the volume with "A Meeting in the Bush", a vignette in which several familiar characters meet up for a brief encounter.

Some of the contributors are shown in the picture below at the signing for the book held at Howard Days last month.  I've tried to identify everyone I can in the picture.  If I've left anyone out, I apologize.

I expected to the stories to be well written.  Amateur press associations tend to attract intelligent, articulate people.  What I didn't expect was the level of professionalism and craftsmanship in the writing.  Like I said earlier, some of these stories are better than most of what you find in professional anthologies and periodicals, and none of them fall below that standard.  Not quite what I would have expected for a group of writers who, to a large extent, are not pros and/or write mostly nonfiction.  This was the second original anthology without a bunch of A-list names I've read in the last month that has surprised me with the high quality of the stories.  (Here's my review of the other one.) If other small press anthologies of this type are this good, I'm going to need to read a lot more of them (and so should you).

If I have any complaint at all, and that's stretching the definition of the world "complaint" almost to the breaking point, it would be that only one story is a nonfantasy.  That being Rob Roehm's, which is a grim western.  (Chris Gruber's comes close to being a straight historical, but does contain a fantastic climax.  Mark Finn's is a definite fantasy, even though it's about a boxer.)  Now I discovered Howard through his fantasy work, primarily Conan, so I'm not really trying to cast stones here.  My point is Howard wrote a great deal more than just fantasy.  There were the westerns, both humorous and serious, the boxing stories, and the historical adventures.  I was expecting more entries in those veins, seeing how the focus was about Howard's inspiration of these writers.  Maybe in the next volume guys?

Finally, one last thing.  This book costs $20.  You might be thinking that's high for a trade paperback, and under other circumstances I would be inclined to agree.  But this is a fund raiser for Project Pride, the community organization that maintains the Howard House, puts on Howard Days, and has done work above and beyond the call of duty to maintain Robert E. Howard's legacy.  If you've been to Howard Days, you understand what that means first hand.  If you haven't, Project Pride maintains the House and grounds.  Provides meals for Howard Days attendees for free (although registration and a donation are requested to defray the cost of the evening meals and to get an accurate count, I don't think anyone has ever been turned away).  Maintains copies of a number of original manuscripts.  And makes Howard fans not only feel welcome but like part of the family.  When you buy this book (and you should), your money will be going to a good cause.

Posted by Adventuresfantastic at 11:28 PM