Dispatches From the Lone Star Front: Profile of an Early Texas Ranger

It got an email last week from Jason Waltz, informing the contributors of Home of Heroics that he was discontinuing adding new material to the site.  Between work and family obligations, not to mention trying to publish the books on the Rogue Blades Entertainment schedule, Jason said he was exhausted and simply couldn't devote the time necessary to maintaining the site.  As regular readers of this blog are probably aware, I was one of the contributors to Home of Heroics, with a quarterly column entitled "Dispatches From the Lone Star Front", featuring heroes from Texas.  It was in a different vein than what I do here, focusing on history with little or no fantasy aspect.  With Jason's blessing, that column will continue here, although I don't know if it will be quarterly, more frequently, or just when I find something interesting to write about.  Reader reaction will help me decide.

Adventures Fantastic would like to wish Jason and Rogue Blades Entertainment all the best.  Home of Heroics will be missed; the contributors are still around and blogging on other sites, so if you enjoyed the work of any of them, look them up if you haven't already.  Now, here is the most recent Dispatch from the Lone Star Front that would have been posted at HoH if things had been different:
There are a number of qualities that are commonly used to describe heroes.  One of them is courage.  John Coffee “Jack” Hays had that in spades.
Hays was one of the first Texas Rangers, seeing most of his service during the days of the Republic, before Texas joined the United States, and then during the Mexican War.  He was renowned for his bravery, cunning, and his leadership.  He was called “Devil Jack” by the Comanches.
The Rangers were formed to protect the Texas settlers, both Anglo and Tejano, against bandits and hostile Indians.  The Comanches were the primary tribe hostile to the settlers, and they were traditional enemies of the Lipan Apaches.  Naturally, the Rangers, and Hays in particular, allied themselves with the Lipan.  Hays’ Lipan scout Flacco is reported by Walker Prescott Webb to have said, “Me and Red Wing not afraid to go to hell together.  Captain Jack he brave; not afraid to go to hell by himself.”
More than once Hays stood his ground against superior numbers and prevailed.  One incident was at Enchanted Rock, now a state park north of Fredricksburg.  Enchanted Rock is a large lava dome, visible for miles, and a perfect spot to scout out the surrounding countryside.  This was what Hays reportedly did one day in the fall of 1841.  I say “reportedly” because Hays never confirmed the story.  On the other hand, he never denied it, either, and he was usually quick to correct any inaccurate stories about himself.  True or not, it’s a great tale.
Hays had left a group of surveyors on the nearby Pedernales River.  He was armed with two revolvers, his rifle, and his Bowie knife.  The only ammunition he had was what was in the guns.  Near the top, he found himself pursued by a party of Comanches.
Now Enchanted Rock is not an easy climb, although from a distance it can appear to be.  I know; I’ve climbed it several times and hope to again with my son when he’s a little older.  The rock is fairly smooth and round in most places, and it’s easy to slip. It can also get bloody hot in the Texas sun, as the rock reradiates the solar energy it absorbs, but like a parking lot does.  There are boulders and small caves on one side (not shown in the photo), but mainly its a steep hike with little to no handholds.
Hays managed to hide in a crevice and holdout until his men were able to rescue him.  The Comanches were notorious for their tricks, and they tried unsuccessfully to get him to waste his ammunition.  The Comanches eventually tired of these tactics and rushed Hays.  He fought off the first rush and was preparing to make his final stand with just his knife when the survey party, alerted by the shots, rode to his rescue.
Hays also changed frontier warfare forever once the Colt Paterson five-shot revolvers were introduced.  In June 1844, Hays and fifteen Rangers were approached by a few Comanche riders.  The Comanches attempted to get the Rangers to follow them.  This was a standard Comanche trick used to lure overeager settlers into a trap.  Hays and the Rangers had used the same trick themselves and didn’t fall for it.
When the Comanches saw that their ruse wouldn’t work, they retreated.  Hays and his men weren’t fooled.  As short time later, they saw the full Comanche war band, between 60 and 70 braves, waiting for them on a rise.  The Rangers charged, but as soon as they were down in a ravine and shielded from the sight of the Comanches, the swept up the ravine and emerged on their enemies’ flank.
Standard practice at the time was to fire only some of the rifles, keeping the rest in reserve.  Armed with the new pistols, Hays ordered his men to fire all their rifles.  They then charged the Comanches.
Even though they were caught off guard by this approach, the Comanches vastly outnumbered the Rangers and encircled them.  The Rangers formed their own defensive circle, dropped their rifles, and drew their revolvers.  Each Ranger had two.  The Rangers charged again.
Up until this point, firearms had had limited effectiveness against Comanches because of the buffalo hide shields they carried were hard enough to deflect bullets when angled properly, and most bullets were fired from rifles shot at a distance.  This tactic didn’t work against the Colts, which could be fired more than once without reloading and be fired accurately at short range.
The Rangers killed at least 20 of the Comanches in the first charge, but the Comanches were not deterred.  They charged again, and again their numbers were decimated.  Only about 20 of the Comanches were left.  Their leader was trying to convince them to attack again when Hays asked if any of his men had a loaded rifle.  He then ordered Ad Gillespie, another renowned Ranger (who had been wounded in the fight), to dismount and shoot the chief.  Gillespie did, putting a bullet through his head.  The remaining Comanches decided running like hell was the better part of valor and fled.
Weapons don’t make heroes.  Courage does, as the life of John Coffee Hays demonstrates.  But weapons can sometimes ensure the hero lives to tell the tale. 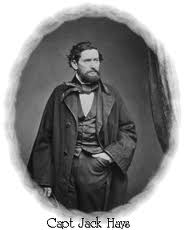 Posted by Adventuresfantastic at 2:30 PM