In the Dead of Winter 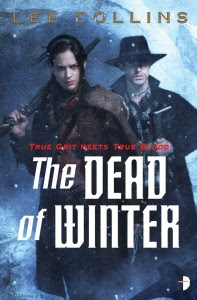 "Courage is being scared to death, but saddling up anyway."
John Wayne

The above quote from John Wayne, which I lifted from The Dead of Winter, is a perfect fit for this book.  This is one of the best novels I've read all year, and I've been fortunate to have read more good ones than bad ones.  This novel is an excellent example of authorial misdirection that really works.

This book takes place in a slightly altered version of the Wild West, where supernatural creatures exist.  They're not widespread, meaning you don't trip over them every time you turn around like in some fantasies, but they are out there.  Cora Oglesby and her husband Ben are bounty hunters, and very selective bounty huners at that.  They specialize in supernatural creatures such as werewolves, hellhounds, vampires, and those sorts of things.

They've come to the town of Leadville, Colorado, at the request of the marshall.  Something vicious has killed two people, and he fears there will be more deaths.  He's right about there being more deaths, and not all of them will come from the creature that's made its first kill.

I'm hesitant to give too many details, because there's a twist towards the end, and it's a biggie.  Many of the things you take for granted aren't as they appear.  The thing that annoys me is that all the signs were there, and I picked up on most of them.  I just didn't connect the dots.  Collins did an effective job of distracting me, just like a stage magician when he doesn't want your attention on certain things.  (I'm annoyed at myself, BTW, not at Lee Collins.  Him I'm impressed with.)

The characters talk like you would imagine characters in a Western would talk.  I'm sure Collins had to turn off his grammer checker.  For the most part, this helped pull me into the story.  A few times it was slightly annoying, but for the most part, I didn't find it overdone.

What I did find annoying was how the viewpoint would sometimes shift between characters in the same scene.  I don't mind multiple viewpoints in a novel, but I prefer the same viewpoint character in a chapter.  But that's just me.  Your mileage may vary.

These are minor quibbles.  Overall, I found this a compelling story that didn't go in the directions I expected it would.  Collins' prose pulled me in and helped me to inhabit the story.  This is a fantastic blend of western and horror, a fine addition to the subgenre of weird western.  If your tastes run to weird westerns, monster hunting, or some combination of the two, then you'll want to pick this one up.

There's a sequel, She Returns From War, that's due out on January 29 in the States and Canada and a few days later in the UK.  I'm looking forward to it.

One bit of editorializing, if I may.  Angry Robot normally only accepts agented manuscripts, but once a year for the last couple of years, they've had a brief window in which they allow submission of unagented manuscripts.  The Dead of Winter is one of those books.  I've heard enough stories about how hard it is to get representation these days to know that many fine books never get past an agent, never mind an editor.  Makes you wonder what we've missed because of the gatekeepers.
Posted by Adventuresfantastic at 6:37 PM