Martha Wells' Death of the Necromancer to be Serialized 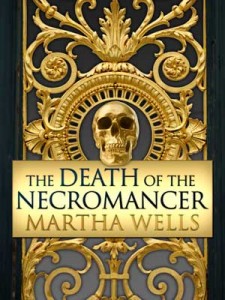 Black Gate has announced that starting on Sunday, June 2, it will begin serializing The Death of the Necromancer by Martha Wells.  This book was nominated for a  Nebula Award in 1999.  It's part of a series but is a stand-alone.

Martha Wells is one of the best fantasists working today.  I've reviewed the following works by her (links are to reviews):  The Cloud Roads, "The Forest Boy", The Serpent Sea, and Emilie and the Hollow World.  The Siren Depths is in the queue.  Martha was also gracious enough to submit to an interview last year.

If you've not read her work before, The Death of the Necromancer is an excellent place to start.   It's a great adventure story with depth, three dimensional characters, and a whole lot of fun to read.  Read it and see why I and the good folks at Black Gate think so highly of her.

And just for the record, I'm not associated with Black Gate.  I'm posting this announcement because this is a fantastic book.  But don't just take my word for it.  Read it for yourself.

Posted by Adventuresfantastic at 11:17 PM