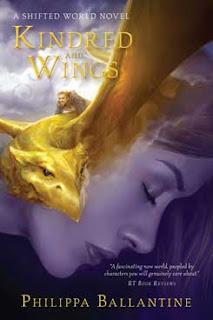 There are a number of viewpoint characters in Kindred and Wings.  Ballantine alternates between them, juggling story lines in a way that makes the action flow.  I've not read her more recent novels in her other series (not because I'm not interested but because I have to sleep sometime), so I can't make a complete comparison, but I think this is some of her best writing.  Each of the viewpoint characters, and there more than just the three I mentioned above, are well defined.  We see each of them at their worst and their best.  Their motives and agendas sometimes come into conflict, and it's here that some of the strongest character development occurs.  While I didn't like all the viewpoint characters, I understood them, and it's because they were so well written that I didn't like one or two of them.  None of them were stock characters.

There are some great action scenes, including several battles, and all are handled well.  But ultimately this book boils down to personal conflict, and it's at this level that the author's abilities really shine.  The scene in the castle where Finn first encounters the shade of his mother, or when Kelanim is in the chapel of wings, not a word is wasted.  The sense of being there, of visualizing what was happening, was particularly strong.

Overall, Kindred and Wings had a more epic feel to it than I remember Hunter and Fox having.   That's probably the result of how Ballantine handles the viewpoint characters.  The respective characters don't alternate chapters or sections of chapters in a predictable manner.  Rather we see what we need to see when it's time to see it.  That means that sometimes a character will be off stage longer in some parts of the book than in others.  We find out the Caisah's secrets, and I really liked what those turned out to be.  Not everything you thought you knew in the first book was true.

If I had to find a flaw in the book, I felt that everyone coming together for the final confrontation was a little rushed.  I was expecting a cliffhanger ending with the final resolution in a following book.  The ending was satisfying, and I don't mean to imply that it wasn't.  I just wasn't expecting it to happen in this book.

Kindred and Wings was a very satisfying read. It hits shelves tomorrow, so if this is your cup of tea, look for it.
Posted by Adventuresfantastic at 4:06 PM