Kuttner's Elak of Atlantis: The Spawn of Dagon 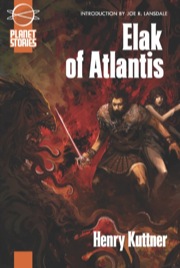 
In my first post about Kuttner's Elak, I stated that the Paizo volume was to my knowledge the first time all the stories had been collected under one set of covers.  I have since discovered that they were collected in 1985 along with the Prince Raynor tales in a volume titled, what else, Elak of Atlantis, with illustrations by none other than Brad Foster.  Unfortunately the link doesn't have much in the way of publisher information.

This second installment in the Elak series, "The Spawn of Dagon," is a completely different tale than the first story, "Thunder in the Dawn."  For one thing, it's much shorter than Thunder.  In fact, this is the shortest of the Elak stories, although the remaining two aren't much longer.

For another, this is a straight action adventure tale with none of the otherwordliness of interdimensional travel we saw in the first installment.  The story opens with Elak and Lycon making a grisly bet over the body of a man they've just killed in a bar fight to determine who gets his purse.  When they have to flee from the guards summoned by the innkeeper, they are rescued by a man calling Gesti, who enlists Elak's aid in killing the evil sorcerer Zend, who has been controlling the ruler of the city.  Elak sneaks into his tower, Lycon having passed out from too much drink, and proceeds to discover that some bargains are best left unmade, especially if they involve getting in the middle of a battle between evil wizards..

Needless to say, Gesti has secrets he's keeping.  Elak, who is rejoined by Lycon, manages to get out of the fix and rescue a beautiful girl from being sacrificed in the process.  Unlike Velia from Thunder, who isn't mentioned, this girl is merely the obligatory cheesecake, with virtually no character development.  Of course nothing in the story states that its events take place following those of Thunder.  We have no idea where in Elak's lifetime this story takes place other than after he was banished and began hanging around with Lycon.

In fact, Lycon spends most of his time passed out somewhere.  What little characterization there is centers on Elak, who is presented in, shall we say, a less than heroic light.  Certainly his motives and actions are less noble in this story than they were in Thunder.  This story is much more imitative of Robert E. Howard's Conan, only without the Cimmerian's inherent nobility and code of honor.  Sort of a Conan Lite.

Negatives aside, there are some positive things about this second Elak tale.  The prose is more polished and flows more smoothly than in Thunder.  One of the best things about it to my mind is that Dagon contains none of the glaring anachronisms of Thunder.

One last thing must be mentioned.  This story has a Lovecraftian feel to it.  Dagon, in addition to being the principal deity of the Philistines in the Old Testament, is also one of the Elder Gods H. P. Lovecraft included in his Mythos stories, one of the earliest in fact.  Kuttner, while not a major player like Howard or Smith, was one of the Lovecraft Circle, a group of writers who borrowed  from each other and added to each other's mythologies.  "The Spawn of Dagon" was considered to be lovecraftian enough to be included in The Book of Iod, a now out of print collection of Kuttner's Mythos stories, and the only Elak story in the book.  While I've never really gotten into the whole Lovecraft and Cthulhu thing, Kuttner handles it well.  The influence is clearly present, yet it doesn't overpower the sword and sorcery aspects of the story.  While some will certainly see that as a shortcoming, I think it's a good thing.

So, in conclusion.  While the characters aren't as developed or as honorable as they were in Thunder, the story moves well, has better prose, and lacks the annoying tendency to try to connect Atlantis to known history.  Overall, an enjoyable adventure story worth reading.
Posted by Adventuresfantastic at 10:50 PM