Nomad the Warrior (2005)
Starring Kuno Becker, Jay Hernandez, Jason Scott Lee
Directed by Sergey Bodrov and Ivan Passer
So I'm in the grocery store, looking at a selection of DVDs on an endcap between the cereal aisle and the cookie aisle (don't tell me these people don't understand product placement) when I pick up this movie with a guy holding a sword while screaming at some sort of army in the background.  Looks promising.  I turn the case over to read the synopsis and notice the movie is in two languages.  English.  And Kazakh.

The movie is set in 18th centurty Kazakhstan, where the nomadic Kazakh tribes, split into fueding factions by the typical greed and desire for power, are being slowly defeated by the Mongol Jungars.  Enter Oraz (Jason Scott Lee), who is some sort of an Obi-Wan figure, a warrior mystic respected by all the tribes, who is searching for a prophesied child who will become a warrior to unite and deliver the Kazakh tribesmen from their enemies.  The Jungars (often spelled Dzunghars) are lead by Galdan (Dokshan Zholzhaksynov) and his evil henchman General Sharish (Mark Dacascos).  Oraz manages to rescue the child, son of the sultan of Turkestan, just before his mother and the rest of their caravan are slaughtered by Sharish and his men, who are seeking to destroy the child and prevent fulfillment of the prophecy.  Oraz manages to convince the boy's father to let him raise the child to fulfill the prophecy. Even though the savior is supposed to be the son of a sultan and a direct descendant of Genghis Kahn, I kept wondering why Oraz simply didn't do the job himself.  Oraz proceeds to take one child from each of the Kazakh tribes and raises a brotherhood of freedom fighters.

Once the boys have grown, Mansur (Kuno Becker), the prophesied one, and his best friend Erali (Jay Hernandez) fall for the same girl, Hocha, which complicates things and ends up driving a good portion of the plot.  Meanwhile Galdan has discovered that he didn't kill the prophesied child after all.  Sharish and his army lay siege to Turkestan.  I'm not sure where these scenes were shot, but it wasn't Turkestan.  There are too many hills outside the citiy.  Turkestan is on a plain.  I know; I've been there.  The picture below was taken in November, 2004, and shows the main surviving structure.  As you can see, no hills.  But that's a minor point that most Americans wouldn't be aware of. 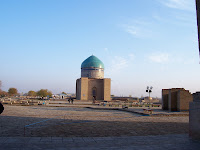 Sharish challenges the Kazakhs to settle the dispute by single combat.  Erali volunteers, but Oraz tells him that Mansur must fight Sharish.  He thens informs Mansur that Sharish killed his mother, claps Mansur on the shoulder, and walks off.  Nothing like a little motivational speech to inspire the troops.
The fight that follows, like all the combat scenes is this movie, is extremely well coreographed.  The equine combat scenes, and there are more than one, are the best I've ever seen.  In fact, the cinematography, costumes, scenery, and musical score are outstanding.  This is clearly not a Hollywood production.
That's both good and bad.  In an American movie, there are guidelines for how animals are to be treated during the filming.  For example, horses aren't tripped.  But there is one scene, where the girl Hocha (Dilnaz Akhmadieva) and her brother are captured by the Jungar,  a scene in which the horses are clearly tripped.  The Jungars have set up a rope across a road, and they raise it as the horses go by.  You can see one of the horses do a face plant in the dirt; it's a closeup of the horses and riders in slow motion.  Not something typically shown in a US movie.
The story has betrayal, love, heartbreak, courage, action, and all the other things you would expect from an epic.  A number of the supporting characters are reasonablly well developed for the amount of screen time they have.  Others, such as Sharish's brother, seem to be in the scenes almost as an afterthought.  I have no idea how much of the original Kazakh film, if any, was cut for the American release, so some of my disappointment here might be due to editing for American distribution rather than the original script.
Ultimately where the movie fails is in the story.  Oraz develops an annoying tendency to be seen sitting astride his horse on a hillside watching Mansur fulfill his destiny.  When Sharish captures Hocha, he uses her brother's life as leverage to get her to agree to marry him.  Yet after this scene the brother is never mentioned again, even though every time we see Hocha for the next hour, she's in the Jungar camp.  Mansur also is taken prisoner and cannot be executed because he is a descendant of Genghis Kahn.  This is a concept seen in Raiders from the North, which I reviewed last week.  At  one point Mansur is forced to fight an opponent who has never been defeated.  The men fight with chain mail veils so that can't see each other's faces.  It turns out to be someone Mansur knows.  How this person got to the Jungar camp and is fighting for them is never explained.  It should be, because this is a major break with how this character has been established.
But the main thing that ruined the story for me was the weak ending.  Determined to smash the Kazakhs once and for all, the entire Jungar army lays siege to Turkestan.  The battle starts promisingly enough, but then the voice-over says the siege lasts on the order of 100 days.  Yet no climactic battle is shown, just a montage of images resulting in the Jungars taking to their horses and riding away pursued by the surviving Kazakhs.  After all the cool fight scenes, talk about an anticlimax.
What would have been better would have been for Mansur to begin to unite the tribes but end the movie with his escape from the Jungars.  That aspect of the prophecy was never really developed, and different tribesmen just kind of stagger in without having much of a noticeable effect.  And how they get through the siege of Turkestan is taken for granted.  Splitting the story would have been more logical.  Sure it would have involved another movie, and more expense, but the story would have been better served.  That way, the final defeat of teh Jungars could have been given a proper treatment.
I had to do an internet search to find a listing of the cast.  The film only gave the actors' names, not the roles they played.  On one site I found a note that the dialogue in the English version, which is what I watched, departed significantly from the English subtitles in the Kazakh version.  I'll probably go back and watch that version sometime soon.  In spite of its flaws, Nomad the Warrior is a film I'm more than willing to see again, if only for the vistas of the steppes, the music, and the combat scenes.
Posted by Adventuresfantastic at 9:35 PM