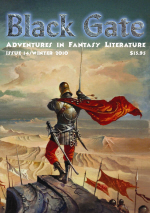 The current issue of Black Gate is so thick, and has so many stories in it, that I want to look at another one before moving on to other venues to examine short fiction.  Next up in this series of posts will be something seasonal (a ghost story), probably followed by something science fictional.

Anyway, on to the story at hand.  This one concerns a female private investigator, one Debbie Colavito, who works as a karmic detective.  She has the ability to detect a person's karma, and, although it's not exactly explained how, she can make changes in that karma.

Now the whole concept of karma is one I've never bought into.  At all.  So right off the bat, I had a hard time getting into the story because I couldn't accept its basic premise.  However, since I had made up my mind to examine the story here in my Long Looks at Short Fiction series of posts, I decided I would try to put my prejudices aside and give the story a try.  Fortunately, that wasn't as hard to do as I thought.

The story opens with Debbie being visited by a prospective client, Will Charbonneau.  Seems Will's lady love, Becky, has suddenly up and dumped him for a car salesman.  Will and Becky met in the Peace Corps, moved in together after they both returned stateside, and are working as high school teachers.  Will is clearly heartbroken and confused over Becky's sudden change of heart.  They were talking about getting married, after all.  Can Debbie check into things and help him understand why this has happened?  He's seen a feature about her in the paper, so he knows she's a karmic detective.

Debbie takes the case, albeit with a little reluctance, since she's sure that Becky's decision to move out was made without any influence from the car salesman.  That is until she discovers the car salesman is Micheal, someone she dated in high school until he raped her on a date.  She hasn't seen or heard from him in years.  As they used to say, from this point on, the plot thickens.

Howe gives Debbie Colavito a distinctive voice, one that's part wise-cracking PI, part single woman making ends meet on her own.  Now I'm a huge fan of traditional PI stories, especially those told in first-person.  I don't care how cliched some people consider the trope to be, it's always been one of my favorites.  And Howe does a good job with this one.  There's a genuine mystery here.  Not all the people or situations are as they appear.  Even if I did have trouble buying into the whole karmic detective angle, Howe develops Debbie's character well and made her someone I cared about.

He does a good job of writing a woman's perspective.  Conventional wisdom is that many men can't write from a woman's viewpoint effectively.  While I don't completely buy that I idea either, (people are people no matter what their gender) I don't completely diasgree with it.  Men and women are wired differently mentally and emotionally.  Debbie is not simply a male detective in drag.  She is able to bond with Becky, whereas a male detective in a more traditional PI story would probably end up in bed with her.  Which is not to say Debbie is completely sexless.  She finds Will attractive.  She just doesn't try to manipulate his emotions to get in bed with him.  In fact, when a situation arises in which she could, she deliberately doesn't.

The writing is in the story is smooth, and the action flows.  The characters are individuals.  Howe has an easy to read style, probably due to his journalism background.  I don't know if Howe has written any other stories about this character.  The author bio doesn't mention any, and Black Gate does a good job of listing previous installments in a series.  While it wasn't what I would consider exactly my cup of tea, I would certainly consider reading more about this character.
Posted by Adventuresfantastic at 4:45 PM