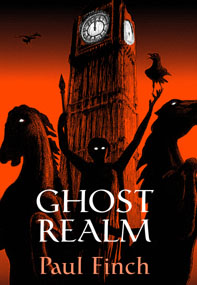 When I was in second or third grade, I don't recall which, I checked out a volume from the school library called A Book of Ghosts and Goblins by, so the internet tells me, Ruth Manning-Sanders.  The internet also tells me it was a collection of folktales from around the world.  I don't remember that part of it, nor do I remember many particulars about most of the stories.  This was, after all, about [CENSORED] years ago.  I remember a few things.  There was one where a little girl got lost or something and ended up in a castle with a talking skull.  The skull had her fix a pancake for supper.  When the girl cut the pancake in half, the skull's half turned black.  I don't remember what else happened, but that scene made an indelible impression on me.

The other story I remember, and I remember it quite well to this day, was the final story, "The Leg of Gold."  You've probably heard or read at least one version of it.  The wife of a rich man trips on the stairs, falls, and breaks her leg so badly it needs to be amputated.  He replaces it with a leg of gold.  Some time passes, and once again she trips (on the hem of her dress, as I recall) and falls, this time breaking her neck.  Her husband has her buried with the leg, but the valet sneaks back to the graveyard and steals it.  Or something to that effect.  Anyway, this is where the action takes place.  The wife starts calling out from the grave day and night for her leg of gold.  The husband goes to the grave to console her, telling her she was buried with it.  She ignores him (probably just like she did in life) and continues to call for the leg.  Finally, the husband gets tired of hearing her calling day and night, night and day, and sends the valet, who by this time is on the verge of a nervous breakdown, to the grave to find out what she wants.  When he asks, she cries, "It is you that I want," rises up from the grave, and drags him back down with her where she devours him.

That story scared the living crap out of me.  I woke up in the middle of the night every night for the next seven nights, terrified that there were ghosts in the room.  I know it was seven nights, because I counted them. I was afraid I would never get another peaceful night's sleep.  There was a whole series of books by this author, and I remember the library having some of them.  I don't recall if I read any of the others, though.  Probably learned my lesson with this one.  On the other hand, knowing me, naah, probably not.  I think I checked out at least one other book in the series, although I didn't have as extreme a reaction to the contents.

Anyway, it was literally years before I could read a ghost story by the light of the afternoon sun and not get a good case of the creeps that night.  But once I grew out of that phase, I realized something.  It was a heck of a lot of fun to be scared silly by a ghost story.

Which brings us, in a very roundabout way, to the story at hand.  For over a decade now, Ash-Tree Press has been publishing nice, well-bound collections of ghost stories.  They've reprinted all the classic writers of the tale such as M. R. James, H. Russell Wakefield, the Benson brothers, and A. M. Burrage, among others.  And if you haven't gotten copies of some of those first volumes, don't bother.  They're long out of print, and if you can find copies on the secondary market (good luck), you probably can't afford them.  (Not everything by the above authors is out of print.  There's still one or two Wakefield books and at least one by E. F. Benson in print.  But Burrage, forget it.  They're gone.)  But they also publish collections by newer writers who are well on their way to becoming masters of the form, such as Simon Bestwick, Terry Lamsley, Steve Duffy, and, case in point, Paul Finch.

Ghost Realm is the second collection from Finch published by Ash-Tree.  The first was After Shocks and a third, Walkers in the Dark, is forthcoming.  And lest you think Finch only writes ghost stories, he's also written some heroic fantasy which I hope to talk about somewhere down the road.  Anyway, this is a collection of nine stories, the longest of which by far is "The Killing Ground."  The stories in this book are all based on some aspect of British folklore or history, and Finch provides story notes at the back of the book explaining each story's inspiration.

This story takes place in the midlands and concerns a (still young) married couple of retired police officers who now work as  private detectives.  The story opens with a prologue in which a gamekeeper on an unnamed estate is trying to catch something in the dark.  He meets a rather grisly end involving two bear traps.  We later learn this was several decades in the past.  Skipping to the present, Alec and Ruth, our detectives are hired by an American movie star.  It seems he wants them to investigate rumors he's heard about a country estate he recently purchased.  The star's wife, a star in her own right, is from Mexico and is very superstitious.  The couple have one daughter, Claudette.  The star wants to throw an elaborate Christmas party there and needs to convice his wife everything is safe.  Upon investigating, it turns out the estate once held a castle in which the lady of the manor and her son were captured during a war by one of her husband's ennemies.  Once he was killed in battle in another part of the country, she and her son lost their value as hostages and were walled up alive.  Legend has it she made a deal with the forces of darkness for revenge.  The condition set to her was that she eat her son.  (He was already dead by this time.)  Ever since, children have been disappearing, starting with the son of the man who walled her and her child up alive.  Upon learning this, the movie star hires Alec and Ruth as additional protection for his daughter.

There were several creepy moments, but for the most part the story reads more like a thriller than a traditional ghost story.  Some of you may be wondering why I'm reviewing a ghost story on blog devoted to adventure fiction with a fantastic bent.  Traditionally ghost stories, while creepy and scary, aren't generally considered adventure tales.  There's plenty of adventure in this one.  Something is definitely amiss at the manor, and the action scenes are gripping and involving.  At times I could almost buy into Alec's insistence that nothing supernatural was taking place.  Almost.  I know, however, that Ash-Tree doesn't publish that type of "ghost" story, where everything has a nice rational explanation.

The preceding sentence isn't meant to imply that the story isn't well written or that I didn't like it.  It was, and I did.  Finch has worked as both a policeman and a journalist.  As a result, he has a lean style that flows very nicely.  Even his descriptive passages about the history of the manor flowed well and were easy to read.  Instead of throwing me out of the story, as some info dumps can do, they pulled me in deeper and helped buiild the suspense.  Finch handles the rationalist Alec and his growing conflict with his wife Ruth, who buys into the ghost theory early on, with a deft, sure hand.  Ruth and Alec are unable to have children, although they've tried.  Every attempt ended in a miscarriage, and the last try was literally the last.  Ruth develops a strong attachment to Claudette, something her governess, a superstitious old Mexican woman, resents.  Because of this, she is more open than her husband to the possibility that Claudette is in danger.  The growing tensions between the characters propel the plot and add to the suspense.   The viewpoint shifts back and forth between Alec and Ruth.  In the hands of a lesser writer this would be annoying.  Finch makes it feel natural.

While this wasn't quite the traditional ghost story I was expecting, I enjoyed it immensely and recommend it highly.  The historical note at the back of the book added to the experience by allowing me a glimpse into this particular author's process of finding inspiration in historical fact and weaving that into a story.  While the setting and history of the estate are ficticious, the walling up alive and the cannibalism are based on actual events.  Fortunately, Finch doesn't concentrate on these points, but instead focuses on characters, using the history to provide atmosphere and motivation for his specter.
Posted by Adventuresfantastic at 10:36 PM