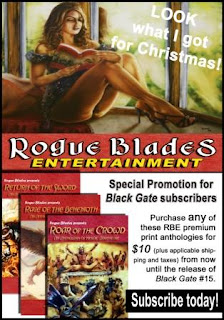 Earlier this year I'm looking around on the Black Gate website when I find this posting.  Seems some outfit called Rogue Blades Entertainment is running a special promotion in conjunction with Black Gate.  If you buy a subscription to Black Gate, new or renewal, you get your choice of one of three anthologies for only ten bucks (plus tax and shipping).  The ad (reproduced here) showed a gorgeous young thing reading a copy of one of the anthologies.  I'd say this is my kind of woman, but my wife might read this so I'll refrain.

I was needing to renew my subscription anyway, so I took advantage of the offer.  The three anthologies offered were Return of the Sword, Rage of the Behemoth, and Roar of the Crowd.  We'll look at the first two in this post.  Roar of the Crowd is forthcoming.  Since I had picked up a signed copy of Return of the Sword from one of the contributors at a Conestoga a few years ago, I went with Rage of the Behemoth.  I then had a decision to make.  RotB comes with five different covers.  I chose the one with the Gryphon. 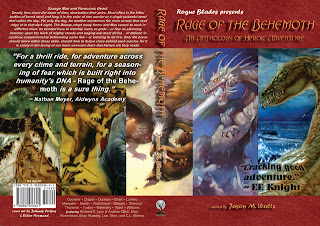 The cover at the left is a composite of all five.  The book is divided into five different geographical regions, each with its own cover illustration. You pick which cover you want when you order the book.  The geographies are Frozen Wastes, Scalding Sands, Depthless Seas, Mysterious Jungles, and Ageless Mountains.

So the book arrives, and I peruse the table of contents.  There are 21 stories.  Most of the authors' names at the time were unfamiliar to me.  Now several of the names are of people whose work I am going to be actively seeking out.  More on them in a minute.  At the time, though, I only saw a few familiar bylines:  Mary Rosenblum, Brian Ruckley, Richard K. Lyon and Andrew J. Offut, Lois Tilton, Bill Ward.  So I figure that the stories by the more well known writers will probably be pretty good and so will some of the others, but that there will be a few dogs thrown into what would probably be a mediocre mix.

I'm glad to say I was wrong.  Boy, was I wrong.  There were no dogs.  Every single story in the book is well told, professionally executed, and worth reading.  Sure, there were some I didn't like as much as others, but with 21 tales, what do you expect?  And no, I'm not going to say which ones I liked least.  Your list will undoubtedly be different from mine.  The point is, I liked them all, something that usually doesn't happen in a volume containing so many selections.  With this many stories, there will be something for everyone.

The stories range across a variety of landscapes and tones.  Some are serious, some grim, others fun larks.  All are entertaining and feature characters we can care about.  There are few cardboard people here.  The vast majority live and breathe.  The diversity of monsters is amazing.  There are manticores, giant snakes, gryphons, dragons, sea monsters, and unclassifiables.  This was one of the best and most fun anthologies of fantasy adventure I've read in a long time. It set a very high standard for the rest of the publisher's line.

This was the first anthology Rogue Blades published, before it was even Rogue Blades.  My copy says "Flashing Swords Presents" rather than the 2nd printing's "Rogue Blades Presents".  Again, 21 stories, including a reprint by Harold Lamb.  That alone is reason to buy the book.  Fortunately, that's not the only reason.  There are 20 more.  While I thought RotB was a slightly stronger anthology, there's absolutely nothing wrong with this one at all.  Again, professionally executed stories, characters we care about, exciting adventure.

The focus of this volume is heroes, who they are, what sets them apart, how they come to be heroes, how they stay heroes.  The editorial introductions help set the tone and provide at times some surprisingly thought provoking commentary on the stories while never spoiling any of the details.  If you're looking for action and adventure, especially with some depth, this is the book for you.  Or for someone you know who really likes to sink their teeth (or fangs) into a really good action yarn.  Some of the contributors are in RotB as well, but there are some others that only show up here, such as E. E. Knight and Angeline Hawkes.  James Enge provides an adventure of Morlock the Maker, his only appearance in an RBE volume so far..

This is the most recent anthology by Rogue Blades.  It's a little different from the others.  First of all, some of the stories were originally published in Clash of Steel:  Demons by Carnifax Press.  Rogue Blades, as editor Jason Waltz explains in his introduction, continued the Clash of Steel series and expanded the volume when Carnifax folded.  The layout is a little different than the other books.  Except for the first page of each story, the text is double columned, and the font on the story titles reminds me of the titles of 1950s  horror movies.  Not that I'm complaining; I rather enjoyed that, especially the font used in the titles.  It's just different enough from the other books that it stood out.  If I had any gripe about the layout, it would be the print is a little smaller and my eyes aren't getting any younger.  But that's a minor point.

I found this volume to be a somewhat weaker than the other two we've talked about.  I'm not sure why that is.  Part of the reason my be that I was trying to read the book during finals week, and as a result I didn't read through it as fast I otherwise would have.  I find not making progress on a book to be one of the most frustrating things I can experience.  Maybe because this was a project started by another publisher, the tone was different or something.  Thematically, this book was less appealing to me than RotB or RotS.  Demons aren't a subject I actively seek to read about, in part because of my religious background, in part because there's only so much that can be done with them before you realize you've read this story before.  Same with vampires.  Or zombies.  Or any other monster/creature/trope that's well defined.

Anyway, for whatever reason, I didn't find quite the variety I found in the other books.  Several of the stories seemed to be similar in theme or content.  That's not to say I didn't enjoy them.  I did.  Just not as much as I did the other books.  Considering how much I was impressed by RotB or RotS, though, that's not as damning (pardon the pun) as it sounds.  This was still a solid anthology with a lot of good fantasy in it.  Or to put it another way, this book is better than most of the theme anthologies that come out each year, including those of a certain major publisher.  You know the one.

Anyway, to sum up.  Rogue Blades Entertainment is an excellent publisher with a line of consistently high quality product.  One thing exceptionally good is that Jason Waltz is open to new writers.  At the moment, he's not reading for any anthology I'm aware of.  Assassins just closed its reading period.  Discovery and Roar of the Crowd are the next two anthologies to be published and should be coming out soon.  They're the next two volumes in my subscription, so I'll let you know when my copies arrive.

What's that?  I didn't mention the subscriptions?  Oh, I'm terribly sorry.  Let me rectify that error.  Rogue Blades has a subscription program.  There are a couple of different options, a three book and a five book plan.  You can start your subscription with any book, so long as at least one of the books hasn't been published when you order.  Plus there are some good deals that don't involve subscriptions.

Now, as I was saying before I got sidetracked about the subscriptions.  These anthologies are a potential market for new writers.  That doesn't mean that the writing is poor.  Occasionally, it might be in spots, but Waltz has high standards, and professionalism is the norm.  He cares deeply about the genre, and it shows.  The result is anthologies that are as good or better than what New York is publishing.  Furthermore, I predict that if some of these folks keep writing, they will be major players in the future.  For that to happen, they need markets.

Who are some of these people?  I hesitate a little to answer that question for a couple of reasons.  One, I don't want to try to predict the future.  To do so is a sure fire way to get egg on your face.  Second, I don't want to overlook anyone.  That could happen for three reasons.  The first is a story might not have worked for me when I read it for reasons that don't always have to do with the story, such as fatigue, environment while reading, interruptions, etc.  Under other circumstances, I might have loved it.  The second is my brain, like my eyes, isn't getting any younger, and the memory is starting to go.   I don't remember the third reason.

Anyway, a short list of authors I want to read more of.  This list is, for the record, open to change, mainly in the form of additions.  In no particular order:  Bruce Durham, Frederick Tor, Bill Ward, Jeff Stewart, C. L. Werner, Jonathan Moeller, and Michael Ehart.  Ehart has written two novels, one of which is available from RBE.  I plan to pick it up next year after my cash flow has recovered from the holidays.

There are not enough markets for sword and sorcery.  The ones we have need to be supported, especially the ones that publish good work.  I've mentioned before that sword and sorcery appears to be in the beginning of a renaissance similar to what space opera has gone through.   Rogue Blades is at the forefront of that renaissance.
Posted by Adventuresfantastic at 9:41 AM