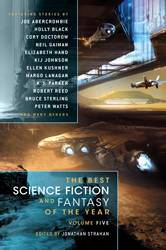 A few weeks ago, I looked at the table of contents in Rich Horton's forthcoming Year's Best Science Fiction and Fantasy 2011.  At the time, I commented on the proportion of selections published in electronic venues as opposed to print venues and speculated as to what the percentage would be in the other annual "Bests".  Since Jonathan Strahan's The Best Science Fiction and Fantasy of the Year is due out in March, I particularly wondered about that one.  Night Shade Books had posted a page for the anthology but had not (and still hasn't) listed the contents. Oldcharliebrown posted a comment (thank you) informing me Strahan had listed his ToC on his website.  Why I didn't think to look there, I don't know.  Anyway, Strahan, unlike Horton, didn't list the publications for his selections.  Rather than reproduce the list myself, you can find it here.  I spent a little time last night looking them up, and here's what I found.

Strahan selected 29 stories, with 6 duplicating Rich Horton's selections.  Those stories are the ones by Broderick, Hand, Landis, Parker, Swirsky, and Watts.  This isn't surprising, since each year there are a handful of stories that make all, or nearly all, the annual "Best" lists.  The good thing is that there are so few duplicates.  I think that shows a healthy variety in the science fiction and fantasy fields.  What is a little surprising is that four of those were published electronically, with three coming from Subterranean.

Anyway, of these 29, 13 were published in electronic format, or 44.5 %.  That's slightly lower than Horton's53.5%, but still a respectable portion from electronic media.  Of those 13, Subterranean was the big winner, with five selections.  Strange Horizons was next with three, and Apex followed with two.  Strahan selected one each from Lightspeed, Clarkesworld, and shareable.net.  The electronic venues not represented that were most surprising were Fantasy magazine and Tor.com. Horton chose four stories from Fantasy and one from Tor.  Clearly the editors have different tastes.

Where Strahan's selections really get interesting to me is the print sources for his selections.  He picked one story each from eight different anthologies, plus two from Stories edited by Neil Gaiman and Al Sarrantonio.  One story was published as a chap book, and the remaining five came from magazines, with four from Asimov's and one from F&SF.  As in the Horton anthology, no stories were selected from Analog, nor were any from Interzone, Weird Tales, Realms of Fantasy, or Postscripts, although Postscripts is now an anthology rather than a print magazine.  I don't remember if they made the change this past year or the previous one; probably the previous.  Time slips away when you start getting older.  And given the problems RoF had this past year, it's not surprising to see that publication's absence.

It seems to me that the print magazines haven't done too well this year in terms of getting tapped for Year's Best anthologies.  While Asimov's appears to be something of an exception, on the whole they seem to be taking a pounding from the electronic and anthology markets.  At least Analog certainly is.  Being a hard science kind of guy, that disturbs me a little, but that's a topic too large for this post.  I'm not sure that's an entirely bad thing from the standpoint of good markets and good fiction being published, whatever the format.  Of course, the Hartwell/Cramer and Dozois volumes are still to come, and I'm sure there will be one or two others that will pop up.  It will be interesting to see where these volumes draw their choices.

This is the first year I've looked closely at the publication sources for any of the Year's Best collections, at least from a pseudo-statistical standpoint.  I have both the Horton and Strahan titles going back to their inceptions, so I could take a closer look (if I can find the time).  It would be fun to look at just when the electronic venues began to make such inroads on the print media.

And for those you haven't seen it but might be interested, Lois Tilton summarized the short fiction markets at Locus Online recently.  I'll not comment on what she says because she reads far more widely than I have time to, and I don't see the point in potentially starting an argument that I'm not well enough informed on.  I'll just say she brings up some good points about the same venues producing the best quality.
Posted by Adventuresfantastic at 11:56 AM