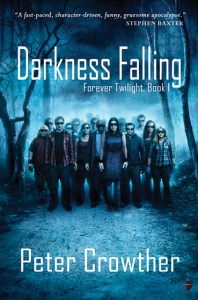 As and editor and publisher, Peter Crowther has few peers.  His accomplishments in these fields have overshadowed his work as a writer.  He tends to write primarily in the horror genre, and this latest novel is no exception.

The publisher classifies it as science fiction on the book's webpage, and I have no argument with that designation.  However, I've chosen to review it here rather than on Futures Past and Present, my science fiction blog, because as a scientist I'm a little skeptical about some of the things that happen.  Since Angry Robot classified Roil as a fantasy and I reviewed it as science fiction (which I maintain it is), I figure this just evens things out.

With Halloween approaching, this book fits the season well.

This is basically a zombie novel with a dash of vampiric photo-phobia thrown in.  There are echoes of the original Night of the Living Dead as well as allusions and references to other classic horror films, not the least of which is Invasion of the Body Snatchers.

Most of the population disappears in a Rapture-like event, a flash of bright light in the middle of the night.  Only a few people are left.  That's about as far as the similarities to the Left Behind books goes.  Twenty-four hours later, there's a second flash of light.  The bodies of the people who disappeared are back.  Only they've changed.  And they're not friendly.

I have to admit my initial impression of this book wasn't exactly positive.  Two of the characters turned me off completely.  The first was Ronnie, whose marriage is in trouble.  He's on a plane with his wife, and he's ogling every female of legal age in sight.  He doesn't disappear, but his wife does.  Also on the plane with him are a little girl named Angel, who happens to be clairvoyant, and the navigator, who doesn't really know how to land the plane.  It's only when Ronnie begins to be a father figure that he becomes a likeable character.

The other character, Virgil, is a serial killer.  What I didn't care for was the detail into his past we were given, specifically the sexual abuse he experienced from his mother.  He never becomes a likeable character, but then he's not supposed to be.  He just suffered from too much information in the early chapters.

After a few chapters, though, I found myself being hooked.  With the exception of Virgil, all of the other characters are appealing, eventually if not immediately.  The fact that they don't all survive adds to the suspense.  Not all of the characters are together in the beginning.  By the end all the viewpoint characters have joined up and have formed a plan, which will be implemented in the next book.  Crowther is a talented writer, and the prose flowed.  The market is somewhat saturated with zombies right  now.  This one is the cream of the crop.

Being a type of zombie novel, there's plenty of gore in places.  While that might turn some readers off, I didn't find it excessive.  There's enough mystery about what happened to keep me reading, even if I'm not entirely sure I buy everything in Crowther's scenario from a scientific standpoint.

There are two more volumes planned in this series, with release dates in the fall of 2012 and 2013.  I'll be looking for them.