The Hammer and the Blade are a Fantastic Combination 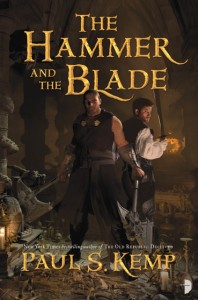 But in case you're one of those people who want to know a little more about a book, here's what  you should know.  In naming the four authors he does, Kemp sets himself a very high bar to try and meet.

He succeeds.  In fantasy there are a number of tropes which are used often enough that they become cliched.  Sometimes that results from a work that has such a impact that many of the writers who follow churn out imitations, some good, some less than good, until the situations and characters in the original work become archetypes to a greater or lesser degree.  Tolkien and Howard are two of the most prominent examples.  And sometimes a book comes along which breathes new life into those tired and heavily used tropes and reminds us why we love them in the first place.

The Hammer and the Blade is clearly in the latter category.  Whether it will become a book that is widely imitated remains to be seen, but if it does, I won't be surprised.  Paul Kemp is now on my must read list.

Here's the basis of the book.  Egil and Nix are thieves, grave robbers to be precise, and they're quite good at what they do.  While robbing a tomb in a distant desert, they end up killing a demon guarding the treasure.  Thinking they have enough wealth to retire, they buy their favorite inn/brothel and prepare to enjoy the fruits of their labors.

Their enjoyment is short-lived.  Rakon is a powerful sorcerer in the city of Dur Follin.  He's the head of the house of Norristru.  Centuries ago, House Norristru made a pact with one of the Houses of Hell.  It's almost time to renew the pact.  The demon Rakon is expecting to come and renew the pact is now dead, killed by Egil and Nix.  Rakon is not pleased.  Our heroes don't even get to enjoy one evening of their new establishment.

This is a sword and sorcery novel that reminds you why sword and sorcery is fun in the first place.  In many ways it's a breath of fresh air.  It's fast paced, smart, funny, and at times extremely dark.   The action and tomb robbing sequences are well done, and the conflict between Rakon and Egil and Nix is riveting.  The supporting characters are well drawn; their relationships with Egil and Nix change and grow.

I'll let you discover the exact nature Rakon's pact with Hell.  The best way to describe it is that it's twisted and insidious.  But Rakon is more than just a Saturday matinee villain who is evil simply for the sake of being evil.  He has believable motives, twisted, yes, but believable.  And despite their flaws, Egil and Nix are honorable men, each with his own moral code.  Those moral codes will be tested, and tested severely, before all is said and done.

Some people, whose opinions really aren't worth paying attention to, criticize sword and sorcery as mindless entertainment.  They should read The Hammer and the Blade.  There's depth to this novel, especially near the end when the heroes face a choice about what type of men they really are.  And while I thought the sun took an awful long time to set in one sequence, I love the poetic justice of the conclusion.

I can't wait to read the next volume.

This book hits shelves here in the States and Canada in a few days, the rest of the world early next month.  Below is an excerpt.  If you like what you read, The Hammer and the Blade is currently the Featured Book at the Adventures Fantastic Bookstore.