This had to be the best Howard Days I've attended, and from what others said, the best ever as far as the weather went.  Because of the recent rain, Friday I don't think the temperature got out of the low 80s, and I'm not sure it got that high.  It felt more like April than June.  Saturday I think the high was in the low 90s, which is still April temperatures for this part of the world.  Today I came home to triple digits.  Welcome back to summer.

The theme this year was Conan's 80th birthday.  Like many people, Conan was my gateway drug to Howard.  While I like all aspects of Howard's work, Conan is still my favorite.  My wife had been sick the day before with the stomach bug from Mordor, so I waited until I was sure she was back on her feet before I took off Friday morning, running a few errands for her and going to the store.  I didn't get there until after lunch, so I missed the tours and the morning panel, which was a tribute to the late Glenn Lord.  Here's my take on what I was there for.


The first panel of Friday afternoon was Guest of Honor Charles Hoffman's presentation of Conan the Existentialist.  This was followed by Paul Sammon, Al Harron, and Mark Finn discussing Conan's Birthday.  When the panels were over, I hit the post office and picked up some postcards with this year's cancellation.  Afterwards, I went back to the pavillion and hung out, visiting with friends until time for the dinner and silent auction.  There were fewer people in attendance this year.  Some of the regulars had various life issues, most of a medical nature, that prevented them from attending.  They were missed.  On the other hand, there were a number of new faces who will hopefully be returning.  The general attitude was it was an up year for that reason alone.
Dinner was catered by The Staghorn Cafe, which makes some of the best chicken fried steak on the planet.  Amazingly, I won most of the items I bid on in the silent auction.  They were all low ticket items, cash being tight this year, but I still walked out with ten books, a comic, and a DVD for less than $30.  I stepped into the parking lot after dinner, got caught in a conversation, and missed some of the Robert E. Howard Foundation Awards. For that reason, I'll not discuss them in depth.

An item that has become one of the most popular panels is "Fists at the Ice House".  Started by Mark Finn and Chris Gruber, this year the panel was held after the awards.  The ice house was just what it sounds like, an ice house.  This was how ice was kept in the early twentieth century, and delivery carts went around every day.  You could buy ice and put it in your ice box, where the ice would keep perishable food cold.  Some older folks (your grandparents and great grandparents) may still refer to the refrigerator as the ice box, and that's where the term comes from.  Ice houses also sold cold beverages, alcoholic and otherwise.  In Cross Plains, there was one ice house in the 1920s where young men would meet for beer and boxing.

Robert E. Howard was one of those men.  Mark Finn makes an excellent point:  If you want to understand Robert E. Howard the man, you need to understand his relationship with boxing.  Some of the first and last stories he sold were boxing stories, and he wrote them throughout his entire career.  Mark, Jeff, and Chris discussed this and read from Howard's boxing works.  It was rather late when this panel broke up.  As much as I would have like to hung around, I had an hour drive to where I was staying, so I took off.

After buying a thank-you gift ofr my wife for letting me attend, I toured the house the next morning.  There are some new additions.  For one thing, a number of books from Howard's personal library are on permanent loan from Howard Payne University.  Several of them are inscribed to Howard from his friends, including one from Edmund Hamilton.  I'll put pictures at the end of this post.

The morning panels (held at the library) consisted of Shanks, Hoffman, and Finn discussing efforts to get academia to take Howard seriously and laying out a strategy for this to happen, and afternoon panels featured Paul Sammon giving a slide show on The Illustrated Conan.  As well as being a writer, Paul works in Hollywood, having been a key person on a number of movies such as Conan, Blade Runner, and Starship Troopers.  If you ever meet him, talk to him. He seems to know or have known everybody and tells some wonderful stories.  The final panel was What's Happening with REH?, and discussed mostly forthcoming books (lots of boxing stories) and some information about movies (nothing major, at least that can be announced).  Then I viewed the collection of books, manuscripts, and pulps, many Weird Tales with Margaret Brundage covers.

This year I got to go to the Legacy Circle members lunch hosted by the REH Foundation.  We nearly took over the Mexican restaurant.  The food was excellent.  So was the barbeque out at Caddo Peak Ranch that evening.  We did have a couple of uninvited guests, or as Paul McNamee called them in response to my tweeting, Set cultists everywhere.  I'm referring, of course, to the snakes.  The first was a copperhead which was only a few meters from the tables.  The other was a rattlesnake the coiled up beside the trail on the hike down from Caddo Peak.  I got a picture of both, but the rattler is hard to see in the picture.  It was coiled, about three feet long, and they can strike two thirds of their body length away.  My telephoto on the camera only does so much, and I wasn't getting any closer.  Here's the copperhead, though.

After eating delicious meal and watching the sunset, I went back to the pavilion.  Barabara Barrett organized an impromptu poetry reading on the steps of the house.  We took turns reading from the poetry books we had.  No one had the complete poems, so I didn't get to read "A Song of the Naked Lands", my favorite.  Dave Hardy had some homemade mead again, which was good, as always.  I visited a while, then hit the road, later than the night before.  It was one of the most enjoyable Howard Days I've been to.

What follows are photos I took this year, some with captions.  I'll try to identify everyone I know; if I leave someone's name off or get it wrong, I apologize.  No slight is intended. 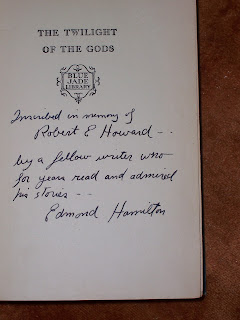 Posted by Adventuresfantastic at 10:56 PM