A Review of Brad Sinor's Where the Shadows Began 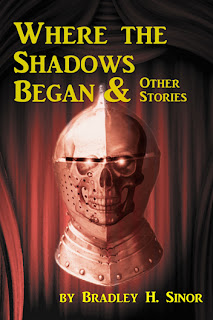 I'd intended to run this review in conjunction with an interview I conducted with Brad and his wife Sue.  Unfortunately, Brad suffered a stroke about the time I finished transcribing the interview, so he hasn't had a chance to check it for accuracy (there were a couple of places where the recording isn't clear).  I have no intention of rushing him.  I'd much rather he focus on getting back on his feet.

In the meantime, I will run this review, partly as a show of support for Brad and partly because I try to find things I think the readers of this blog will enjoy.  And there's plenty here to enjoy.

Bradley H. Sinor is mainly a writer of short stories.  This volume contains 15 selections, plus an afterward telling a little about how each story came to be written.  There's a wide variety here, from Lovecraftian horror, to alternate history, to Arthurian vampires.

Rather than give a synopsis, even a one line synopsis, of each story, I'll highlight some of my favorites.

"The Adventure of the Other Detective" was one of the best, although I did have some issues with it.  In this tale, John Watson, M.D., finds himself in a parallel universe in which the master criminal Sherlock Holmes is pursued by the great detective Professor James Moriarty.  This one involves Jack the Ripper.  At one point we're given the information that the Ripper was captured in July of 1888.  I've read quite a bit about the Ripper, and this threw me out of the story.  The Ripper murders took place in the autumn of that year.  But then I remembered that this was an alternate timeline, so they very well could have been committed earlier than in our timeline.  And I was back in the story.  This was one of the longer entries in the collection, and Sinor does a great job of capturing the voice of Watson.

"When the Wind Sang", Oaths", Central Park", and "Final Score" all involve the famous vampire Lancelot du Lac.  What's that you say?  You didn't know Lancelot was a vampire?  Well, now you know.  On the surface, that might sound like a mashup you don't need, but I assure you, you do.  These stories take place throughout history, from shortly after the fall of Camelot in the first tale to a ren faire in contemporary Norman, Oklahoma.  Lancelot is an interesting character who hasn't managed to get Guinevere out of his system.  Not surprising since she's the reason he's a vampire.  We get enough of the back story through these tales to whet our appetites and make us want to know more.  In "When the Winds Sang", Lancelot returns to Camelot not long after its fall to discover there's another knight impersonating him.  In "Oaths" he meets a serving girl who is the spitting image of his lost love.  Merlin reminds Lance that even the smallest of deeds can carry on the principles of Camelot in "Central Park".  Lastly, Lance hunts down a serial killer at a renaissance festival in "Final Score".

"John Doe #12" takes place contemporaneously with "Final Score", although the characters and killer are completely different.  This one has series potential, and I'd like to see more of the characters.

This list is by no means exhaustive.  There are fairy tale mashups.  Several of the stories take place in theaters, both the live and the film kind.  There are ghosts and superheroes.

There is one thing all the tales in this book share.  They're entertaining.  Make that two things.  They're also fun.  If you haven't read Sinor, Where the Shadows Began is a great place to start.
Posted by Adventuresfantastic at 9:58 PM