An Exciting Return to Feyland 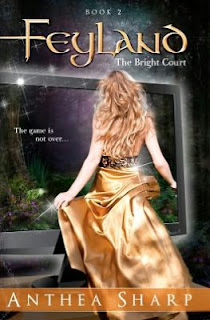 Earlier this year I received an very polite email from a lady whose name was new to me.  The sender of the email, Anthea Sharp, asked me if I would be interested in reviewing her new YA fantasy novel, Feyland: The Dark Realm.  She was kind enough to say that if the book turned out to not be my thing, I didn't have to review it nor should I feel obligated to finish it.

I thought this was very gracious of her.  I took her up on her offer, and the book turned out to very much be my kind of thing.  It was well written, exciting, with characters who were real and reminded me at times of my younger days.  You can read the whole review here.

Well, now the next installment in the series is out (and has been out for a few months; my apologies to Ms. Sharp for taking so long to review it.)  I'd like to thank Ms. Sharp for sending me a review copy.  The question most of you are probably wondering about is, does this volume match the first in quality?

The answer is "Yes, very much so."

The story opens a few weeks after the end of Feyland: The Dark Realm.  Tam has just gotten out of the hospital, although he hasn't entirely recovered from the wounds he suffered saving Jennet.  Jennet has healed, although her hands bear the scars of her burns.

Even though they managed to escape the Dark Queen, they aren't safe.  There's a new student at school, and his mother is Jennet's father's boss.  She's the CEO of the company developing the immersive sim game Feyland, and she's adamant about getting it on the market as quickly as possible.  Her son Roy acts like he owns the world, and everyone except Jennet and Tam seem to go along with it.

Here we see a different aspect of the fairy realm.  The stakes are higher.  Feyland is dying and needs life force from the real world to survive, but that life force comes at a cost.  There are only two people who can stop it.

The second book in a trilogy has the reputation of being filler and setup for the conclusion.  Some of that is probably unavoidable due to the nature of the story structure involved in a trilogy.  If that's the case here, it didn't seem like it.  The pacing is good, and the intensity builds throughout the novel.  While there are places in the novel where it's clear we're going to see further developments with certain situations and characters, there's a complete story arc here with a satisfying resolution.  This book builds on the previous while not repeating it.

The characters have a great deal of depth.  This isn't another angsty YA series.  Not only are Tam and Jennet's characters well developed, those of some of the secondary characters grow and change as well.  There aren't a lot of action scenes; most of the time the protagonists have to think their way out of situations.   But when they have to fight, Ms. Sharp handles the action scenes like she writes them every day.

My review copies have been electronic.  The production values are top notch and professional.  There's an interactive Table of Contents.  The cover art for Feyland: The Dark Realm has been changed.  That's it below.  Both covers were done by Kimberly Killion at Hot Damn Designs. I think they look great.  I wish all electronic books were this well done.

The conclusion to this trilogy is due out this fall.  I'm looking forward to it.  There are hints throughout the novel that the Dark Queen is up to something.  Jennet's father doesn't believe that Feyland is influencing the real world, but he's going to be beta testing the game for its release.  That's going to happen in the third book.  Tam and Jennet have been warned by allies in Feyland that things are going to get worse.  This one is going to be good.

For the month of September, the electronic edition of Feyland:  The Dark Realm is on sale for only 0.99 across all platforms.  This is a great series.  I have to admit I had a few reservations before reading the first book because I hadn't read any YA in ages.  Ms. Sharp is an accomplished romance novelist under the name of Anthea Lawson.  Since I don't read straight romance (but don't object to it being mixed with other genres), I wasn't sure what to expect.  As I've said, I was quite pleased.  This series has the basics I look for in any book or story, regardless of genre: three dimensional characters, suspense, action, and good pacing.  Take advantage of the sale and check this series out.  You'll be glad you did.  Here are the links for Kindle  Nook and Smashwords.

And if you prefer paper to electronic editions, both Feyland books are featured books at Adventures Fantastic Books.
Posted by Adventuresfantastic at 10:54 PM