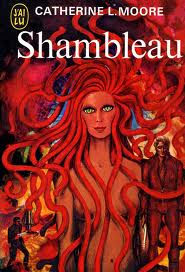 "Shambleau" is the first of the Northwest Smith adventures, and the first published story by C. L. Moore.  According to Lester del Rey, in his introduction to The Best of C. L. Moore (1975), she had been writing for 15 years before she submitted anything for publication.  I'd like to know where he got that information, but I'm not questioning it.  Since he'd known Moore personally for decades, I'm inclined to believe him.  Of course, what I'd like even more is to get my hands on some of those unpublished stories.  I suspect they've long since ceased to exist.

I don't remember if "Shambleau" was the first story I read by C. L. Moore, but it certainly made the strongest impact on me.  Here's a synopsis of what happens (spoiler alert):

A young woman is being chased by a mob down a street in a spaceport town on Mars.  The mob is closing in on her when she runs into Northwest Smith, a notorious criminal.  He intervenes on her behalf to the bafflement of the crowd.  Smith takes her back to his room, tells her she's welcome to stay for the few days until he gives up the room and leaves.  This girl isn't human, and Smith doesn't recognize her race.  She's dressed only in a shift and a turban.  Smith assumes she's bald.  He realizes later she's not when he sees her tuck what he thinks is a lock of hair under her turban.  He's sure he saw the lock move on its own.  But he must be mistaken...

While Moore points out that sexual temptations don't have much hold on Smith, he does find her attractive enough to make advances.  At least until he takes in his arms, at which point he finds her repulsive.  He doesn't really understand why that is, only that the repulsion he feels is almost primal in nature.

Smith is in town setting up some type of criminal venture.  We're not ever told what.  Over the next few days, Smith experiences a back and forth attraction and repulsion.  He struggles with it, but ultimately he succumbs.  Only when Smith's partner Yarol shows up does Smith have a chance of escape, and even then it's not easy.

Moore is playing with the concept of a gorgon, and goes so far as to state that the ancient Greeks had some knowledge of the Shambleau, which is the name of the race rather than of the girl.  She even takes her resolution from that myth.

One of the things that's so interesting about this story is that for all its length (~30 pages), not much actually happens.  Other than the initial confrontation, which takes less than 5 pages, and Yarol's rescue of Smith and the conversation that follows, about half of the story revolves around the Shambleau's seduction of Smith.  Yet Moore's prose is so rich that you hardly notice that that many pages have passed.

And it's the seduction that is the heart and soul of the story.  Moore makes it very clear that Smith's fall into the Shambelau's clutches is a very bad thing, but she also makes it clear that it's also an intensely pleasurable thing.  And it's described as the Shambleau caressing and touching Smith's soul more than his body.  It's how she feeds, essentially a type of psychic vampire.

Moore also stresses Smith's internal conflict, attracted by the pleasure and repulsed by the unnaturalness of it.  It's a struggle he ultimately loses, giving in to the temptation while the whole time being repulsed by his actions.  It's a struggle that on some level most people can probably relate to.  The desire for something that you know is wrong or harmful, the momentary pleasure of something that will ultimately destroy you.

The imagery is definitely sexual in nature.  While tame by today's standards, I suspect this was pretty potent stuff back then.  It was certainly powerful to the teenage boy I was when I first read it.  Awash as I was in hormones, this story had a major impact on me.  It was almost like Moore was reading my mind at times as I struggled to understand and contain the natural changes I was undergoing and the accompanying urges.  And while the emotional impact when I reread the story the other night wasn't nearly that intense, echoes were still there.

The reason "Shambleau" had such an impact on me, and why its popularity and acclaim has endured for over 75 years, is simple.  What Moore deals with here, as I mentioned in a previous paragraph, is something that most people can relate to on some level.  She's dealing with what it means to be human, what it means to struggle with what's right and what's convenient.  Unlike many writers obsessed with their own self-importance, she does it by telling a compelling story, and telling it well.right up to the end.

Much has been made of Moore's introduction of emotion and sexuality into the science fiction and fantasy fields in the 1930s.  I'm not going to rehash that here.  I have neither the time nor the patience for the literature search.  And I'm certainly not going to get into amateur psychoanalysis, a la L. Sprague de Camp with Robert E. Howard, and try to interpret Moore's emotional and mental state.  I have too much respect for her to ever do that.

One last bit of trivia.  At one point in the story, Smith hums the tune of a song, "The Green Hills of Earth."  Robert Heinlein has gone on record saying this was the inspiration of his classic story by that name.
Posted by Adventuresfantastic at 10:51 PM