A Look at Beneath Ceaseless Skies #120 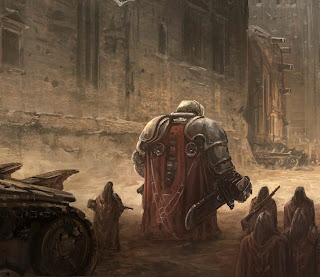 It's been a little while since I last reviewed an issue of BCS.  The current issue contains the usual two stories, one with steampunk themes, which is a little different than what you usually find here.

First up, "The Clockwork Trollop" by Debra Doyle and James D. Macdonald.  A scientist in Victorian England try to reduce the number of women engaging in prostitution by creating an untiring and hygienic lady of the night.  (He envisions training the current prostitutes to maintain their replacements.)  Like much social engineering, this one has some serious unexpected consequences.

This was a relatively short story, and the general way things end up isn't exactly unexpected.  Still, Doyle and Macdonald do a good job of capturing the feel of the times.  This one had an aura of Arthur Conan Doyle  hanging over it.

The longer of the two stories was "The Drowned Man" by Laura E. Price.  This is a complex tale about two sisters who are returning from an island that isn't entirely in this world.  They've recovered an artifact for a museum and are hoping the museum will hire them in this capacity on a regular basis.  While in the middle of the ocean, they spot a man in the water.  At first they think he's drowned, but when the ship's crew pulls him onboard they discover he's still alive.

They should be asking themselves why he's still alive if he's in the middle of the ocean...

The thing I liked most about this one were the hints regarding the two sisters.  Ms. Price seems to have worked out the backstory quite thoroughly.  I'm not sure if "The Drowned Man" is a stand alone with a detailed background, the inaugural installment of a new series, or only the most recent episode of a series already begun.  I rather hope there are either other stories about these characters out there, more to come, of both.  The sisters aren't exactly lady-like nor are the the kind of women warmly welcomed in polite society.  The author hints they may have been raised by a witch, so that probably has something to do with it.

Anyway, an enjoyable issue, although the subject matter of "The Clockwork Trollop" might not be to everyone's taste.  The next issue should be out within a few days, so look for another review soon.

Posted by Adventuresfantastic at 10:47 PM

Email ThisBlogThis!Share to TwitterShare to FacebookShare to Pinterest
Labels: Beneath Ceaseless Skies, steampunk