With Emilie, in the Hollow World 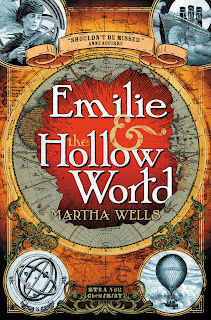 Once upon a time there was a form of popular fiction in which a band of intrepid explorers ventured into new and uncharted lands.  Often their adventures were of a somewhat fantastic nature, involving lost worlds and forgotten civilizations, the Professor Challenger novels by Sir Arthur Conan Doyle being a prime example of this type of fiction.  Since much of it was written during Victorian times, the subgenre tends to have a Victorian and/or British Empire feel to it.  For whatever reasons, the arbiters of taste and sophistication considered these adventures to be essentially for boys.

This subgenre has fallen from the heights of popularity it once enjoyed.  The reasons for this are beyond the scope of this review.  What is within the scope of the review is that Martha Wells has come along, dusted off the subgenre, given it a heroine to broaden its appeal beyond just boys, and shown us all how it's done.
Emilie and the Hollow World is the first in a new series of YA novels.  It's a great start, and I'm looking forward to reading future installments.

The setup is as follows:  Emilie is essentially an orphan being raised by her aunt and uncle, her mother having gone off to be an actress and suspected of becoming a prostitute.  Tired of the abuse she suffers, Emilie runs away to join a friend in a distant city.  Not having enough money to get all the way to her destination, she stows away on board what she believes to be a ship sailing to the port shes traveling towards.

It turns out the ship is more than just a ship.  It's been outfitted with a special engine to allow it to travel the aether currents which will carry it into the legendary Hollow World.  Before she discovers this, however, the ship is attacked and the crew barely manage to repel the invaders.  It's only with the help of Kenar, a nonhuman visitor from the Hollow World, that they succeed.  Kenar had befriended a Dr. Marlende when he had taken an airship through a volcano and into the Hollow World.  When Dr. Marlende had run into trouble Kenar and one of Marlende's crew returned to the outer world to bring help.

Now Marlende's daughter has sought the aid of Lord Engal (who owns the ship) in rescuing her father.  And Emilie is along for the ride, although before it's all over Emilie will do much more than ride.

This book was a lot of fun, and I can see it being made into a successful movie if handled properly.  There are plenty of thrills, chills, and excitement.  Wells only shows us a small portion of the Hollow World, and she's definitely left room for a sequel.  Make that sequels.  There's plenty of room to explore.

If you've read Wells' Books of the Raksura, (the first two reviewed here and here, with a review of the third forthcoming), then you know Martha Wells is one of the most accomplished practitioners of world building working today.  Emilie and the Hollow World doesn't disappoint.  We only get a glimpse of a small portion of the Hollow World, but it's a fascinating glimpse.  There are partially sunken cities.  There are at least three races, with the existence of others implied.  There are raiders and pirates and betrayal.  Even those this book isn't steampunk, there are airships.

Emilie is the type of heroine who at one time would have been described as plucky.  She's a very sympathetic protagonist.  Somewhat timid at first, circumstances force her to grow up and realize just how much she can accomplish when she tries.  Child and adolescent protagonists are some of the hardest to write simply because they tend to have events happen to them rather than influence events.  Wells does a good job of keeping Emilie in the thick of the action without making the situation seem contrived.

The writing is smooth and flowing, and the book moves quickly propelled by the urgency of the mission the rescuers have set for themselves.  Wells still manages to fit in a great deal of character development, and not just of Emilie.

Emilie and the Hollow World, while marketed as YA, is a terrific read for anyone young at heart who loves a good adventure.  It's a Featured Book at Adventures Fantastic Books.  Below is an excerpt:

Posted by Adventuresfantastic at 10:38 PM