A Visit to Joyland 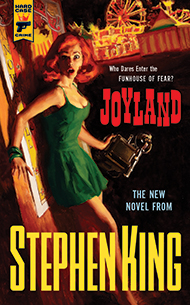 So on Friday night I took my family to Joyland, and we had a great time.  The weather was unseasonably cool albeit a bit muggy.

What?  No, really, we did.  That's the name of our local amusement park.  Has nothing to do with the novel by Stephen King other than it helped with the mood.  I finished the book after we got home.

Anyway, the day the book came out, I stirred my stick and went and bought a copy.  At Wal-Mart.

For a Stephen King novel, it's pretty short.  It's also not really the sort of thing you usually expect from him.  For one thing, it's not a horror story.  Oh, sure, there are hints of a ghost (well, more than hints, actually, but not much more than that), and at least one of the characters has the Sight, but for the most part it's a coming of age story, with a murder mystery thrown in for spice.

Set in a failing North Carolina amusement park during the summer and fall of 1973, it's the story of Devin Jones, who takes a summer job at Joyland and gets a great deal more than he bargained for.  For one thing, a murder occurred in the fun house a few years previously.  Since then the place is rumored to be haunted.  Jones is trying to forget the girl who broke his heart, and no, he doesn't fall in love with the ghost.

He does heal.  And he does stay on after the summer season ends.  Eventually he meets Annie and Mike, a single mother and her dying son.  And through them, he learns to live again.  At least he will if he can survive a chain of events he's set in motion, in part by befriending them.

The book didn't resonate with me the way "Rita Hayworth and Shawshank Redemption" or The Green Mile did.  For one thing, the book starts off kind of slow.  Still, I quite enjoyed the story.  Most men can relate to the heartbroken  young man who narrates the novel from the perspective of late middle age.  And I've always been a sucker for carnival/circus stories, holding Something Wicked This Way Comes and Blind Voices up as masterpieces of the form.  There's something appealing about working as a carny, although I wouldn't want to try it at my stage of life.

There were moments of pure creepiness, but not many, and it seemed King didn't milk them for all they were worth.  Not that I'm complaining; it wasn't that kind of book.  I've not read a great deal of his work, more short fiction than novels.  But a number of the touches I've admired King for were there.  The foreshadowing that's also misdirection.  The details that appear to be window dressing but turn out to be significant.

Joyland probably won't be considered one of King's major works, but it's a solid piece of storytelling.

Posted by Adventuresfantastic at 10:43 PM