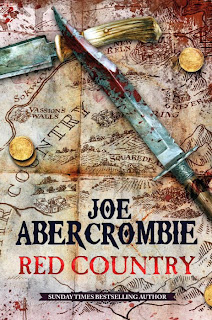 Joe Abercrombie's next novel, Red Country, is due out in the UK from Gollancz on October 18 and in the US from Orbit on October 23.  I know what I'll be reading over the Thanksgiving break (unless I can score an ARC first).  Gollancz has released the UK cover.  That's it on the right.

From what I've been able to learn, it seems to be a Western in a fantasy setting, where a woman seeks revenge out on the frontier.

Finally, if you're wondering what the book is about, here's the jacket copy:

“They burned her home.
They stole her brother and sister.
But vengeance is following.
Shy South hoped to bury her bloody past and ride away smiling, but she’ll have to sharpen up some bad old ways to get her family back, and she’s not a woman to flinch from what needs doing. She sets off in pursuit with only a pair of oxen and her cowardly old stepfather Lamb for company. But it turns out Lamb’s buried a bloody past of his own, and out in the lawless Far Country, the past never stays buried.
Their journey will take them across the barren plains to a frontier town gripped by gold fever, through feud, duel and massacre, high into the unmapped mountains to a reckoning with the Ghosts. Even worse, it will force them into alliance with Nicomo Cosca, infamous soldier of fortune, and his feckless lawyer Temple, two men no one should ever have to trust…”

Posted by Adventuresfantastic at 8:53 AM