Blogging the Lost World of the Warlord 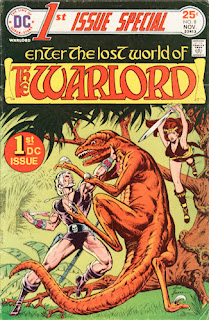 Back in the 1970s DC Comics had a try-out title they called 1st Issue Special.  It was one of those things like Showcase had been in an earlier era where new characters, teams, and series were given a trial run.  Reader response determined if a particular character or team got his/her/its/their own book.  It was also at this time that sword and sorcery was enjoying a period of popularity, in part due to a boom in Robert E. Howard's work.  This carried over into comics, with Marvel's Conan.  DC tried to get in on the excitement by attempting several sword and sorcery titles.  Of these, only Mike Grell's The Warlord lasted more than a few issues.

The Warlord premiered in 1975.  I didn't start reading the title until the early 1980s, when it had peaked and begun a long decay, but there were a number of solid issues with some good sword and sorcery storytelling still to come.  Mike Grell was still writing and drawing the book and would continue to do so for a few more years.

I'm going to take a look at this series, and I'm going to try to post on a regular basis, meaning once every week or every other week, hopefully on the same day.  We'll see.  I'll focus on one to two issues at a time.  If this series of posts is well received, I'll continue until I reach the point where Grell left the book.  If not, I'm sure I can find something to blog about.

The story opens with Air Force colonel Travis Morgan flying a solo spy mission over the Soviet Union in 1969.  His plane is damaged in a missile attack, and while he survives, he doesn't have enough fuel to make it back to the US, specifically a base in Alaska.  He tries to save time by flying over the north pole.  As he passes over the pole, his compass spins wildly, with the explanation that it won't work over the North Pole.

Now I'm a physicist by training and there are just some things I can't ignore, at least not easily.  This is one of them.  On the geographic North Pole, the compass would point south because the magnetic axis and the spin axis of the Earth don't line up.  The magnetic pole in the northern hemisphere is near the western coast of Greenland.  (It moves slowly with time, so I'll not try to be more specific.)

Anyway, Morgan crashes his plane, and much to his surprise discovers himself in a tree in a jungle.  While walking, he discovers a dinosaur attacking a beautiful maiden, scantily clad, of course.  He rescues her, although it's something of a team effort, the girl is the one who delivers the killing blow.

They are soon captured by slavers and taken to the city of Thera, where Morgan immediately gets on the wrong side of the high priest Deimos.  He still has his sidearm and shoots a globe Deimos uses to try and get inside Morgan's mind.

Thinking Morgan is a god, he and the girl are treated as royalty.  Bathed, wined, and dined, they are given a chamber where they immediately fall asleep.  It's during this sequence that Morgan is given the first costume he would wear in the series, a sort of black leather tights without sleeves.  The winged helmet and loincloth would come later.

At this point Grell reveals another aspect of Skartaris, the name of the world he's in.  Time has no meaning.  When Morgan and the girl awake, they discover a great deal of time has passed.  He was clean cut when he went to sleep, but when he wakes up he discovers his hair and beard are long and shaggy.  It's here he adopts the forked beard, a la Green Arrow.  This was another aspect of the series I was never crazy about because at times it will seem as though the characters never age even though decades pass in the outside world.

Being adept at linguistics, Travis Morgan quickly picks up the language, learns the girl's name is Tara, and some basics about the realm of Skartaris.  Here's where I have another problem, not just with this story but with any  hollow world tale.  Morgan tries to explain to Tara that they are in the center of a world and gravity holds them to the sides.  The problem is that gravity doesn't work that way.  There is no gravitational attraction to the side of a hollow sphere or a spherical shell.  Not because gravity doesn't exist, but because it cancels out.  And it does it everywhere, regardless of where you are in the cavity.  This is basic physics that's been known for centuries.  Makes it hard for me to suspend my disbelief.

Deimos hates them and wants Morgan dead for humiliating him in front of the king but is hesitant to move against Morgan because the people think him some sort of god..  One "night"....rather while Morgan and Tara are sleeping Deimos sends mercenaries into assassinate them.  But Morgan and Tara wake up in time to defeat the mercenaries and escape, ending the first appearance of The Warlord.  Why Deimos didn't try this while they were asleep the first time, when Morgan's hair and beard grew so long, is never explained.

We'll look at the first and second issue of The Warlord in the next installment of this series.  For now, a few closing comments.  First, the series hadn't found its legs at this point, a common thing for most new series in just about any format.  Most of the supporting cast haven't been introduced nor the characters of Morgan or Tara well established.  The two page opening spreads that would come to characterize Grell's run on the book wouldn't start for a while.

I was a pretty naive teenage when I read this series, and I'm interested in seeing what subtle things I missed.  Or just plain don't remember.  The Comics Code Authority was still very much in place at the time The Warlord was launched.  It would be another decade, give or take a few years, before the direct market would open the door to more adult oriented themes and content.  I'm curious as to what things I missed when I first read these, and I'll speculate at times as to how the series might have been different if it hadn't been subject to the Code.

There have been some attempts to revive the character and/or the series in the last decade or so, but I've not read them.  The general consensus based on what little I've heard is that they weren't successful in terms of story.  I'd like to see Grell take another stab at the character.  That may be too much to hope for.
Posted by Adventuresfantastic at 8:40 AM