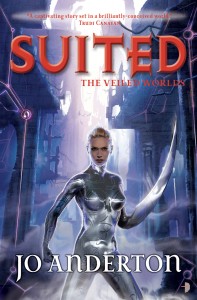 I liked the premier novel in this series, Debris, although I took issue with the publisher's classification of it as science fiction; as a scientist, I have to regard the way some things happened in the book as fantasy.   Either way, it was a great read.  Suited is even better, in my not-so-humble opinion. It's easy to see why she won the Ditmar Award for Best New Talent.  Congratulations, Jo!

The story picks up shortly after the events in Debris.  The Puppet Men are still out there, and they have plans for Tanyana and her collecting team.  Starting by splitting them up.  Lad and Tanyana end up in the same team, while Lad's brother and protector Kichlan goes to a different team.

Right from the start, things begin to go wrong.  Debris is hard to find, making quota difficult to achieve.  Ordinary debris, that is.  The half alive stuff keeps popping up, and in the worst places.  Tanyana's suit is getting stronger, not to mention developing a mind of its own.  The Keeper is talking to Lad, although Tanyana is the only one who can see him, and then only when fully encased in her suit.  The Keeper insists they help him rather than trying to meet their quota, and what he asks can be chilling.

There's a member of Tanyana's new team who has a suit like hers.  He may or may not be what he seems.  But he's not the only one with secrets.  Tanyana has a few of her own, such is she pregnant?  Some of the team members she's been working with are hiding things as well.  As is the Keeper.

The relationships between Tanyana, Lad, and Kichlan continue to grow and deepen.  This is one of the places where Anderton shows her strengths.  Her friendship with Lad and deepening love for Kichlan are complex, multifaceted, and believable.  Which makes the impact of the second half of the book so devastating.

All hell breaks loose.  Things move along at a breakneck pace, and Anderton handles the action like an author with more than just two published novels under her belt.  I finished the last third of the book in almost a single sitting and barely noticed the passage of time.  By the time you turn the last page, everything will have changed.  Where Anderton is going to go with the next book, I'm not about to try and guess.  I'm just going to go along for the ride.

Suited is a dizzying tour de force that's not really like anything out there.  And that suits me just fine.  Both Debris and Suited are featured books at Adventures Fantastic Books.