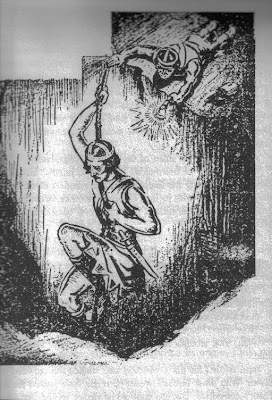 "Dust of Gods"  was the fourth Northwest Smith story, and it was the last of the series published in 1934.  The picture on the left accompanied the story in its original publication in Weird Tales.  I scanned it from the only reproduction I'm aware of, the anthology Weird Tales:  32 Unearthed Terrors (Dziemianowicz, Weinberg, and Greenberg, ed., Bonanza Books, 1988).  The book was printed on paper not much higher grade than the original pulp, and it's yellowed with lines of text bleeding through from the other side of the page.  But at least you can get a feel for what it would have been like to read the story in its original appearance.  (What, you didn't think I could actually afford copies of Weird Tales from the 30s, did you?)

Anyway, this installment in the series is a departure from the earlier tales.  For one thing, Smith is not off by himself getting into trouble.  His partner Yarol the Venusian is with him.  In other words, Smith has company when he gets into trouble.

Secondly, there isn't any exotic feminine menace in this one, and there certainly isn't any of the sexual imagery that we saw in "Shambleau", "Black Thirst", or "Scarlet Dream". While there isn't any sexual content or theme, there is still an exotic menace. But compared to the earlier ones, it's not that great of a menace.

The menace this time is more of a science fictional nature.  The previous stories were science fantasy.  "Dust of Gods" is essentially science fiction, although not of the hard science, nuts and bolts variety.

The story opens with Smith and Yarol in a bar on Mars, drinking and commiserating about their lack of funds.  They notice some men acting strangely at a nearby table.  Smith and Yarol are contemplating approaching the men when another man at an adjacent table stops them.  He tells the duo that the men worked for him but failed to complete a task, recovering something very ancient in a lost Martian city.  He convinces Smith and Yarol to try and succeed where the others have failed.

What he tells them is that at one time, before man arose on Earth, there was a fifth planet from the Sun where now there are only asteroids.  This planet was ruled by three gods, all long gone, and two of them forgotten by most members of the races currently inhabiting the solar system.  The third is still remember, and goes by the name Pharol.  In fact Yarol had used his name as an oath minutes before the man approach him and Smith.

These gods came from another realm, and ruled until catastrophe befell the fifth planet.  All that's left of Pharol is dust, and it's this dust the man wants Smith and Yarol to retrieve for him.  In need of cash, they sign on.

The two end up in an ancient Martian city near the North Pole of the planet.  Deep beneath the city, after avoiding a trap, they find a chamber filled with a strange glowing light that flows like water.  In the center of the chamber is a huge throne built for three occupants.  And in one of the seats there is a pile of dust.  Yarol climbs up to gather the dust while Smith waits below, thinking while he watches the light pour out of the chamber.  He concludes the guy who has hired them is up to no good, and if he gets his hands on the dust, there's no telling what kind of damage he could do or if there would be any way to stop him.  They decide to leave the dust.  Just to be safe, they destroy it with their blasters.

And that's pretty much all that happens in the story.  It's very much a departure from the earlier tales.  The setting is a pretty standard science fiction setting for the time in which "Dust of Gods" was written.  The concept of gathering literal dust of a god is an original idea, and not one I've seen much done with outside of this story.

But this story lacks the power and impact of the earlier ones.  Maybe it's the lack of suggestive or outright sexual imagery.  Maybe Moore was having an off day when she wrote the story.  (Okay, a series of off days since she almost certainly didn't write this one in one day.  Or maybe she did.  That would explain a lot.)  It almost reads as though Moore had tired of the character, but with another 10 installments to come in the series, that's hardly likely.  Moore's prose is still as rich and evocative as ever, but it seems like there's less she wants to evoke.  The menace isn't particularly threatening, and all Smith and Yarol really have to do is think for a bit.  While they do encounter some danger, it's not really of the soul-shattering kind in the previous stories.

Whatever the reason, I found "Dust of Gods" to be the weakest story in the series to date, even though it's not a bad story.  That sounds harsh, but it's really not saying much.  Moore on a bad day was better than almost every writer of her time on a good day, with a few exceptions such as Howard.  She's certainly better than many of the writers working today, even the acclaimed ones.

There are 10 more stories to go, and I'll look at another one soon.
Posted by Adventuresfantastic at 11:26 PM