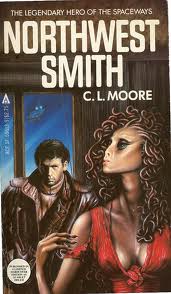 The opening paragraph discusses Smith's myriad scars, focusing on one particular scar over his heart.  The next paragraph finds Smith waking up in a dark room with no idea where he is or how he got there.  He manages to find a wall and put his back to it.  This is a good thing because there's something else there with him.  Whatever is there touches him, delivering a strong electric shock.  When he wakes up, the thing is still there somewhere, but there's a young girl as well.

The girl, who is named Apri, is the servant of Juhli.  Juhli is a fearsome member of an alien race that lives in the city of Vonng.  Vonng exists in two planes.  In Smith's the city is in ruins, but in Juhli's plane the city is still quite inhabited.  Smith learns that he's been captured, but his capture is an error.  He's been captured to feed Juhli.  The error comes from Smith's notoriety.  Normally those taken are folks who won't be missed.

Juhli makes her appearance and takes Smith and Apri to a structure that loops back on itself.  What I mean by that is when Smith walks in a straight line between the columns supporting the roof, he eventually returns to his starting point.

Juhli isn't human, although there are some superficial resemblances to humanity.  For starters, she's basically humanoid from the waist up.  Moore doesn't give a clear description of her from the waist down but implies she has the body of a snake.  Her facial features are definitely not human.  Her mouth is circular and doesn't close, and she only has one eye in the middle of her forehead.  Above that is some type of organ that resembles a feather.  In spite of this inhuman appearance, Juhli is described as being beautiful.

Juhli wants to feed on Smith's life force, and takes him in her arms.  She places her mouth on his chest, which is the source of the scar mentioned in the opening paragraph.  During the process, Smith experiences emotional extremes:  exhilaration, terror, any strong emotion Juhli forces him to experience.  In the process Smith sees the universe and Juhli's world through her eyes.

I'll not spoil the ending by saying how Smith manages to escape.  I will say the ending is particularly bleak.

Yet the whole thing seems tired, like Moore is just going through the motions.  We've seen this before.  It's not really new.  Instead the story has an air of familiarity about it.

In spite of this, I liked the story.  This is, after all, C. L. Moore we're talking about.  Her prose is superior to most of what you'll find, even when it's not necessarily her best.  The woman could make long descriptive passages interesting, something that's not easy to do.  So, while not as strong a tale as some of the earlier entries in the series, "Juhli" is still a decent story.

Posted by Adventuresfantastic at 11:10 PM