A Review of Writing Fantasy Heroes 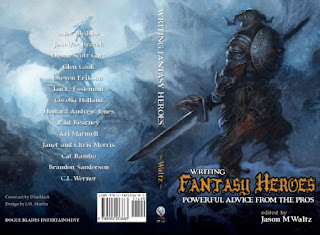 It's taken me longer than I anticipated to finish this book, and that's in no way a reflection on the book.  It's been one of those weeks.  For about the last two months.

Anyway, you didn't come here to for me to kvetch.  You want to know about the book.  It's a keeper.

If you're looking for a technical manual on the nuts and bolts of writing, things like basic story structure, you won't find it here.  Well, not much, anyway.  This book is designed more for the aspiring writer who is looking to hone his or her craft and take it to the next level, which preferably would involve publication, rather than the novice writer just learning to put a story together.  I read Writing Fantasy Heroes from cover to cover, albeit in pieces between other books, but I think the book's values rests in its use as a reference that one picks up and consults as needed more than as volume to read straight through..

The reason I say that is that each chapter addresses a different aspect of heroic fantasy, and not all aspects will appear in all stories or novels.

For example, Howard Andrew Jones discusses the dynamics between partners/friends/comrades and how to use the interaction between two heroes to best effect.  Paul Kearney explains what it really takes to move a large army and to fight a major battle. not so much the combat itself (although he does address that issue), but the logistics involved in military life.  Alex Bledsoe contrasts the older, wiser hero with the young pup and delves into how to write maturity in a way that's consistent with the reality of that stage in life..

Ari Marmell talks about using tropes effectively and how to avoid cliche in doing so.  Glen Cook deals with adding a dash of the unexpected.  C. L. Werner discusses things from the monster's perspective.  Brandon Sanderson blocks out several fight scenes, taking them from boring to engrossing.  Ian C. Esslemont demonstrates the difference between showing and telling.

There's much more.  One of the added bonuses is that Jason Waltz required each contributor to use examples from his or her own work.  I found several authors whose work I want to hunt down and read through this process, so thanks, Jason.

I learned a lot from this book.  More than that, some of the chapters helped me to bring together concepts or techniques I'd been more or less aware of and helped me either to see them in a new light or to see new connections or applications of them.  It was the same kind of A-Ha moment I get when I gain new insight into a physical system after studying a scientific problem.  One of those Oh-of-course!-Why-didn't-I-see-that? kind of thing.

There's a lot of good advice here, and while I'm not the brightest bulb in the chandelier, I like to think I've acquired enough wisdom to realize that there things in this book I'm not ready for yet.  What that means is that I haven't yet tried to write the story where I need that piece of counsel.  But if/when I try to write that story, I know where to go to find out how it's done.

The list of contributors is impressive, with some of the major names in the field weighing in on various aspects of the craft.  The glimpse into their minds is fascinating at times. And invaluable.

As I stated at the beginning of this review, this isn't an introductory writing manual.  It's delves into the deeper, more accomplished aspects of the craft.  If you write heroic fantasy, or aspire to, then this book needs to be on your shelf.  It will be more valuable to you than any number of the writing guides out there.

Posted by Adventuresfantastic at 10:12 PM