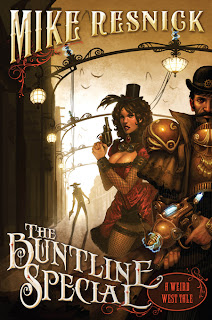 One of the legendary gunfights of the Old West took place in Tombstone, Arizona, between the Earp brothers and Doc Holliday on one side and the McLaurys and Clantons on the other.  Of course there were a number of things leading up to the gunfight and many consequences following.

Mike Resnick has taken a look at the gunfight through a steampunk fantasy lens.  It's a fascinating blend of fact, almost fact, and should have been fact shown from the point of view of Doc Holliday.

Before I go on, I have to say that for a while as I was reading I kept seeing and hearing Val Kilmer as Holliday.  You may recall he played Holliday in the 1993 film Tombstone.  Kilmer brought such a - [ We interrupt this review to bring you the following public service announcement:

Pyr publicist Lisa Michalski contacted me late last year asking if I would like a review copy of Mike Resnick's latest Weird Western novel, The Doctor and the Rough Rider.   I replied that while, yes, I would very much like a review copy, I hadn't read the first two books in the series.  Ms. Michalski very graciously sent me all three, for which I would like to thank her.

Since then a number of Pyr books have shown up without my asking, many of them second or third volumes in series I haven't started yet.  I've been acquiring the volumes I've needed, and I intend to read and review them all.

I  would like to apologize to Ms. Michalski as well as editor Lou Anders for taking so long to read and review the titles they've sent me.  I've had an extremely heavy load this semester, and my reading time has been curtailed like it hasn't been in years.  Guys, thank you for the books.  I intend to read and review all the ones you've sent (plus the preceding volumes I haven't read, since I hate starting series in the middle).  I greatly appreciate your sending the review copies and only hope I haven't appeared ungrateful or opportunistic by not having reviewed them yet.

Anyway, once finals are over in a couple of weeks, I intend to take some time off and get caught up on reading, blogging, and personal writing.  About every second or third review here will be a Pyr title until I've caught up, so don't be surprised at the sudden proliferation of Pyr titles.  The straight science fiction titles will be reviewed over at Futures Past and Present.

We now return your regularly scheduled blog post, already in progress.]  - Holliday to say "I'm your huckleberry" like he did in the film.

But you don't want to hear about a 20 year old movie, you want to know about The Buntline Special.  The premise of this series is that in an alternate timeline, the westward expansion of the United States has been stopped at the Mississippi River by the magic of Native American medicine men, Geronimo being chief among them.  This hasn't stopped individuals from moving westward, settling in many place that they settled in our timeline such as Texas, Colorado, and Tombstone.  (I'm curious if Texas is still an independent nation in this universe.  Resnick mentions Texas but doesn't give much detail.)

In Tombstone, a pair of inventors, Thomas Edison and Ned Buntline, have been working and producing such things as electric lights, a horseless carriage, and mechanical whores that never tire.  It's the horseless carriage that is causing the most problems.  The decreased demand for horses has made some of the local horse thieves antsy, particularly the Clantons.  But what has really made Edison a target of assassination is that he has been contacted by the US government to find a way to defeat the spell preventing the US from expanding westward.  That's got the medicine man Hook Nose all in a tizzy.  He cuts a deal with the Clantons to eliminate Edison to their mutual benefit.

The first attempt on Edison's life cost Edison his arm, which he and Buntline replace with a mechanical arm.  Upping the stakes, Hook Nose resurrects the recently killed gunslinger, Johnny Ringo (who is very much alive in the Tombstone of our timeline).  In an effort keep Edison breathing, Virgil, Wyatt, and Morgan Earp send for Doc Holliday and Bat Masterson.

And thus the stage is set for one of the wildest showdowns in the Old West in any timeline.

There are two things Resnick excels at, and those are dialogue and attention to detail through painstaking research.  (Well, actually, he excels at more than two, but those are the two things I want to focus on.)  First, the dialogue.  If you've read Resnick, you know how he makes conversation seem natural.  The result is a story that flows, sounding as though real people are having real conversations.

The second is the detail.  Resnick either knows his history, does his research, or as I suspect, both.  He includes an extensive bibliography along with an appendix telling what really happened to the major players in our timeline.  One of the most fun things about The Buntline Special was seeing what things Resnick kept the same and what things he changed in the telling of his tale.  The result was staying up long after I should have been in bed one night researching some of the major players online.  (That's not a complaint, BTW.)  I'd read quite a bit about Tombstone and the Earps, but that was over a decade ago, and memory, like radioactive substances, has a half-life.  And in my case, not a very long half-life.

This was a highly enjoyable book.  We're seeing a resurgence in the weird western.  Here's one by a master.

There are two more books in this series so far, and the next one has Billy the Kid in it.  I'm looking forward to what Resnick does with him.

Titles in Mike Resnick's Weird Western series are currently featured books at the Adventures Fantastic Bookstore.  The Buntline Special is on sale for $12.36 plus shipping.

Posted by Adventuresfantastic at 9:38 PM