Return to the Empire State in The Age Atomic 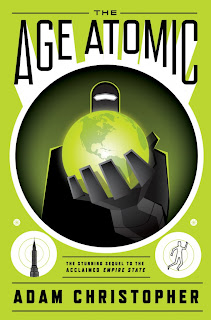 The Age Atomic is the sequel to Adam Christopher's debut novel, Empire State (reviewed here).  Since that book was published, he's also produced a superhero novel, Seven Wonders, which has been in my TBR pile since last summer.  (The Great Move happened just after that and really threw my reading schedule off; I still haven't caught up.)

The Age Atomic continues the story begun in the first installment of this series.  When the tale opens, private investigator Rad Bradley is in the process of stumbling on a plot involving an army of robots.  If that weren't bad enough, the Skyguard has disappeared.  So has Captain Carson.  The Fissure has as well, cutting off the Empire State from New York.

And speaking of New York, a dead woman named Evelyn McHale runs a government sponsored agency called Atoms for Peace.  What she's doing is building a robot army to invade the Empire State.

Christopher pulls out all the stops in this one.  There are not one but two robot armies.  (I think I see one of the reasons this novel appealed to this particular publisher.)  The writing was smoother and the characters more defined than in Empire State.  That was one of the things that appealed to me.  Christopher carefully selects some of the minor characters and lets us in on things from their viewpoints.  It deepens the story and gives it more of an epic feel.  What's happening isn't a battle between a few superpowered mystery men.  It will have an impact on everyone, great and small.  By fleshing out the bit players, the walk-ons, and the redshirts, Christopher adds a layer of humanity to his story.

The action moved the story along at a fast clip.  There are plenty of chases, fights, and intrigue for fans of pulp fiction.  There isn't as much superhero action as there was in the previous novel, but that's more than made up for by the robot armies.

If you liked Empire State, this is one you will most certainly enjoy.  Pick it up.  Adam Christopher's books are currently Featured Books at Adventures Fantastic Books.