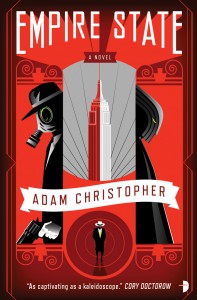 
If you like pulp superheores, noir, action, mystery, and a fun read, then this is the book for you.  If you notice, the release date on this novel is two days after Christmas, so you will have something to buy with that Christmas money Grandma always sends.

I was fortunate to score an eARC through the Robot Army, and I'm glad I did.  The storyline wasn't quite what I was expecting, but that's good.  Angry Robot has a pretty solid track record of publishing stuff that isn't the same old thing.

So what's the story about, you say?  I'm glad you asked that.

Now I don't want to give too much away, because a great deal of the fun is how Christopher plays with your perceptions of what's really going on and who's on whose side.

The novel opens like a burst from a Tommy gun, literally.  Rex, a small time Manhattan bootlegger, is on the run from a bigger bootlegger he's offended.  While making his escape, he gets caught up in the crowd watching a battle between the Skyguard and the Science Pirate over the Empire State Building, under construction at the time the book opens.  These are New York's two superheroes, once partners and now bitter enemies.

The battle creates a pocket universe, the Empire State, which isn't a nice place.  It's a darker version of New York, filled with perpetual rain and fog and governed by the Chairman of the City Commissioners.  That's an actual photo of him to the right.  (Really.  It is.  Don't believe me?  Read the book.  You'll see.)

Over in the Empire State, a detective named Rad is hired to find a missing woman.  It's at this point that the novel departs from the superhero genre into the PI genre, at least for a while.  You can rest assured the case will involve superheroes, since Rad had a run-in with one just before he gets this case.

Being a detective in the Empire State is even harder than it is in New York.  For one thing, the Empire State is in a perpetual state of Wartime, fighting the Enemy, an unseen foe somewhere out in the fog.  Every few months a new fleet of ironclads is launched, crewed by men who have been turned into robots.  In all the years of Wartime, no ironclad has ever returned.  Until now...

I'll refrain from telling you further details of the plot.  I don't want to spoil anymore surprises.  There are twists, turns, crosses, and double crosses in this one.  It has a delightfully pulpy feel to it.  Especially during the airship chase.

I know that at least one person who follows this blog has been waiting for this one.  It's almost here, and I think you'll find it will have been worth the wait.