As most of you probably know, one of my all time favorite artists died Monday.  Darrell K. Sweet was the first artist I ever became aware of by name.  It was something of a circuitous process.

I grew up reading comics, but when Star Wars (the original film) came out, I got bitten by the science fiction bug hard and started reading that almost exclusively.  Commercial fantasy hadn't quite experienced a boom, although there was some around.  Not too long after the movie, I noticed a novel (maybe in the library, maybe in the bookstore) that had Darth Vader on the cover.  The title was Splinter of the Mind's Eye, and it was written by some guy named Alan Dean Foster.  Although I don't remember actually doing so, I bought the book, read it, and enjoyed it.  (I still have that copy.) 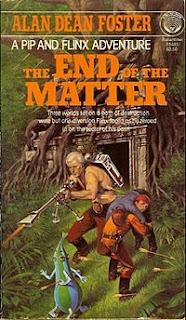 I started looking for more of this Foster guy's stuff.  This was in the late seventies, and Del Rey was publishing quite of bit of Foster's Commonwealth novels, still one of my favorite universes.  I was transitioning from the children's section of the library to the adult section (YA as we know it didn't exist in those days) and that shift was mirrored in my buying habits.

I quickly became a fan of the Flinx and Pip novels, and since new ones were being published at this exact time, I bought and read them.

Being a voracious reader, I even read the copyright page, a vice I still practice, and learned the artist's name was Darrell K. Sweet.  I loved the covers of the Flinx and Pip novels.  There was detail and color.  Action and adventure.  Sweet had a unique style.  He became the first cover artist I could recognize and identify on sight, although others would follow.

I noticed his work on the mass market paperback editions of The Hobbit and The Lord of the Rings.  He did the covers for The Chronicles of Thomas Covenant.  Piers Anthony's Xanth.  Some of the early Well of Souls novels by Jack Chalker.  L. E. Modesitt's Recluse series.  Early novels by James P. Hogan, Robert Don Hughes, and Joel Rosenberg. 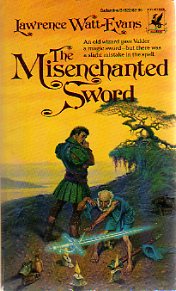 He seemed to be everywhere.  One of my favorite covers was for Lawrence Watt-Evans' The Misenchanted Sword, the first in his Ethshar series.  The yellow and orange glow of the setting sun, contrasted by the blue glow of the sword and the greens in the clothing and vegetation.

Sweet would later become known for his work on Robert Jordan's Wheel of Time, but I've never felt those were his best covers.

I can't say, even after thinking about it for the last two days, what it is about Darrell K. Sweet's work that resonates so much with me.  Some of it is early imprinting for sure, but I still react the same way when I see a new piece by him (new to me at least).

Part of it is the detail.  Then there was the way the physical features, especially the facial features, made the people in the illustrations stand out from each other as unique individuals, as though Sweet had captured some essence of that character in his work.  His women were always gorgeous and alluring, yet somehow wholesome and pure.

We met on three occasions.  One was Armadillocon 14 in 1992, which I think was my first Armadillocon.  The second was at Conestoga 8 in 2004.  The final time I met him, and the time I had the most interaction with him, was at Fencon III in 2006, when Sweet was the Artist Guest of Honor, Alan Dean Foster the Writer Guest of Honor, and Lawrence Watt-Evans was the Special Guest.  At the end of the convention, I told him that when I was a teenager, I didn't read every book that had one of his covers, but I did pick up and seriously examine every book that did.  He seemed to really appreciate the compliment.

That wasn't just flattery, either.  It was true.  In thinking back, as well as reflecting on what others have written, I think part of that was because the genre was different then.  Science fiction and fantasy were a lot more fun.  We weren't inundated with hot female demon hunting private investigators who engaged in some sort of necrophilia with the dead, the undead, or the mostly dead.  Sweet's art reflected this sense of adventure.  I've been thinking about how much the genre needs that.  Books then were shorter, less heavy in tone and content, and not as likely to try and raise my social consciousness. It was a heckuva lot more fun.

I'll have some time to hit the second hand bookstores here in town over the next couple of days.  I'm going to see what old paperbacks with DKS covers that I haven't read.  Final exams are starting, and I could use some fun.
Posted by Adventuresfantastic at 10:37 PM