She Takes After Her Parents More Than Her Brother Does

Okay, I know what I want for Christmas.  A time machine.  That way I can go forward in time and pick up copies of the next two volumes of the Danilov Chronicles and read them.  Now.  Because I don't want to wait.  Jasper Kent says on his website that the next two books won't be out until 2013 (provisional title, The People's Will) and 2014 (provisional title The Last Oprichnik).  The world could end before then (like next year, maybe?), and then what would I do?

Oh, well, nothing much I can do about publication schedules.  Instead let me encourage you to start reading this series if you haven't already.  Each book is different than the last, but if Kent continues to maintain the quality he has so far, this series will be greater than the sum of its parts.

And if you haven't read either of the preceding books, Twelve and Thirteen Years Later, reviewed here and here, this review will contain spoilers for those two but not The Third Section.

In the earlier books in this series, we saw a lot of vampire hunting. While there's some in this book, with Kent again coming up with some clever ways to dispatch the undead, the focus here is more on intrigue.  Do you remember how Shakespeare would create the most convoluted plots where the characters would misinterpret words or events or deliberately mislead each other?  And how those misunderstandings added to the tension and suspense?  In The Third Section Jasper Kent has crafted a web of misunderstanding and deliberate deceit of Shakespearean proportions.  Do you remember how Shakespeare used this trick in both his tragedies and his comedies?  Jasper Kent hasn't written a comedy.

The book is set against the backdrop of the Crimean War and takes place over about a year and a half, roughly.  There are three viewpoint characters. 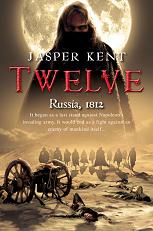 First, the lady, Tamara Valentinovna Komarova, daughter of Alexsei and Domnikiia.  She's in her early 30s, has lost her husband and children, and is now working for the Third Section, also known as the Tsar's secret police.  She's just returned to Moscow from Saint Petersburg and is given an undercover assignment, running a brothel.  The same brothel where her mother met her father.  One of the prostitutes is named Raisa, and she helped Iuda escape from Chufut Kalye in 1825.  One of the others is about to be murdered in a manner similar to a murder that occurred in the same building in 1812.

The man in the secret police Tamara directly answers to is named Yudin, but like some of Tolkien's characters, he's known by other names.  Richard Cain.  Vasiliy Makarov.  Iuda.

Dmitry Alexseivich Danilov is a captain in the army, helping defend Sevastopol on the Black Sea.  When the book opens, he's about to get an unwelcome visit from some "friends" of his father's.

And that's all I'm going to say about the plot.  I don't want to spoil any of the surprises.  And there are plot twists aplenty, almost all the way to the last page.

So rather than ruin the pleasure of experiencing the twists, let's talk about how Kent handles the characters.  This is the first time we've seen things from Iuda's point of view, although he got considerable stage time in Thirteen Years Later.  Kent does a good job of showing us Iuda's motives while not turning him into a sympathetic character.  Instead, we have a deeper understanding of how evil he truly is and how he was a monster long before he became a vampire.  Yudin, as he's referred to here, is a master of manipulation, deceit, and betrayal.  There were times I was reminded of Hannibal Lector, the way he pulled strings.

As a result of losing her husband and children, Tamara has become obsessed with the idea that she has a set of parents who are her true parents and the parents she's grown up with are deceiving her.  This is a common fantasy of small children who are unhappy with some aspect of their home lives, but it's not typically an idea entertained by a grown woman.  In this case, though, we know it's correct.  Alexsei and Domnikiia left Tamara in the care of the Komarovs when they were exiled to Siberia at the end of Thirteen Years Later. 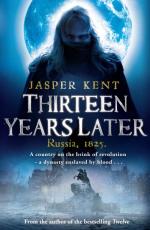 Finally, there's Dmitry, who will turn fifty before the book is over.  In Thirteen Years Later, he was incensed that his father was betraying his mother by having an affair with, and a child by, Domnikiia.  The years have mellowed him somewhat, or at least caused him to understand his father's motivation and forgive him.  Dmitry is his father's son, especially after he returns injured from the war and his behavior in many ways follows down the same paths as Alexsei's.  Ultimately Dmitry proves that he isn't the man his father was, and in some surprising ways.

The contrast between Tamara and Dmitry is fascinating.  Both of them end up following in their father's footsteps, and in Tamara's case, her mother's as well.  Dmitry is an officer in the cavalry, although he is only a major and hasn't accomplished nearly as much as his father did by his early forties.  Tamara is both an agent for the Tsar and a prostitute.  It's this contrast that the title of this review refers to.  Tamara excels at both her parents' professions, secret agent and prostitute, while Dmitry is neither the decorated soldier his father was nor the accomplished vampire hunter.  How the children end up fulfilling their parents' legacies, or fail to, is what makes this book such a gripping read.

Of course, there's another character, one who doesn't take an active part in the events, but who nevertheless casts a long shadow over them, and whose influence on the events and people is almost palpable at times.  Alexsei Ivanovich Danilov.  This was another aspect of the novel that I found so captivating, how Alexsei's actions from decades before had such an influence and how small details from the earlier books took on greater significance.

With this latest installment of the Danilov Chronicles, Jasper Kent adds to the depth of the series and sets up the conflicts in the remaining two.  This series is a generational story of a family, their successes and failures, and there are still two books to go.  Family history affects multiple generations.  That's certainly proving to be the case with this series.

Like I said in the opening paragraph, I can't wait for the rest.
Posted by Adventuresfantastic at 11:44 PM