A Review of the Final (?) Issue of Realms of Fantasy, Plus Some Suggestions 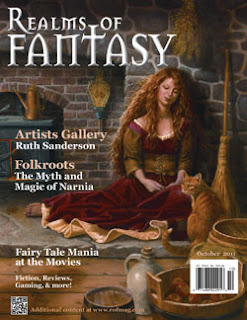 Well, I had hoped it would never come to this.  While Realms of Fantasy hasn't exactly been my favorite magazine, I'm very sorry that it has ceased publication and this will be my final review.  For the time being, at least.  It's come back twice before, so we can always hope.

This issue wasn't planned as a final issue, so I don't know if there were any stories still in inventory.  I imagine if there were, the authors were paid a kill fee and hopefully some of them will see publication elsewhere.

Publisher William Gilchrist said in his farewell post on the magazine's website that the October issue would appear in print and would be late. He indicated that the issue should be available by November 15.  I haven't seen it, but it might not have arrived yet.  B&N tends to be late getting the print copies.  I bought the PDF version from the website.

Anyway, let's look at the fiction.

There are five stories in this issue.  We'll take them in order.

First out of the gate is "Return to Paraiso" by Rochita Loenen-Ruiz.  I've not read anything by Ms. Loenen-Ruiz before.  This was a well written piece about a girl who is brought back to her village by the army in an unnamed Central American country.  She's pregnant and kept in a cage.  She may also be the consort of a god and carrying his child.  This story falls into the nature mother's passivity defeats the evil of masculine machines, a type of story that really doesn't appeal much to me.  However, this one was better written than most things in this vein, and I rather liked it.

"The Man Who Made No Mistakes" by Scott William Carter is by far the most ambitious and morally complex story in this issue and arguably in any issue of the magazine since its last resurrection.  It concerns a young man with the ability to go back in time and change the course of events.  The only catch is he can't go further back than the most recent change, whether that's five minutes ago or five years.  He's in something of a quandary because he's committed a horrible crime and the way a certain person is affected by that crime is the only thing that keeps civilization from collapsing.  Every attempt he makes to undo the crime ends in major disaster.  It's one of the strongest stories I've read in months, and I expect to see it on the awards ballots and in some of the Years' Best anthologies next year.

"Second Childhood" by Jerry Oltion is a ghost story of a sorts.  Oltion is a writer that doesn't always connect with me, in part because I find his work too preachy at times.  This particular story isn't as bad as some, but not a lot happens in it beyond the narrator's mother comes back from the dead and various discussions the narrator has with her husband about the implications of that event.  While some men might find the situation to be a horror story, I couldn't get too excited about it.

The cover story, "Sweeping the Hearthstone" by Betsy James, is what I think of as a typical RoF story.  It's about a girl who comes to work in an inn, only to discover there's a spirit inhabiting the hearthstone in the main hall.  A spirit who is romantically interested in her, an interest that turns out to be mutual.  This one is about emotions.  While competently executed, it's not the sort of thing I prefer to read.

The final story is "Barbie Marries the Jolly Fat Baker" by Nick DiChario, in which the toy knight runs away from home because Princess Barbie is getting it on with the baker toy.  Given the author, I expected this one to be competently executed (in this I wasn't disappointed) and something more original (in this I was disappointed).  The ending gave me the impression the author got bored with his scenario and didn't know where to take it, and so just stopped.

So that's an overview of the stories in the October 2011 issue of Realms of Fantasy.  This is (for now) the last issue.  With the exception of the Carter, and to a lesser degree, the Loenen-Ruiz, there isn't a lot here to recommend it.  I realize your mileage may vary.

I hope RoF returns.  It's happened twice before.  Maybe it will again.  If it does, I'd like to make a couple of suggestions to any potential buyers/publishers.

First, go digital.  Several prominent magazines began as print and are now electronic only, including but not limited to Fantasy, Something Wicked, and Apex, while others such as Clarkesworld, Beneath Ceaseless Skies, Lightspeed, and Heroic Fantasy Quarterly started out electronically and seem to be doing just fine. I can't imagine all the color illustrations are cheap to print.  You can get the same quality of illustration electronically.  You also don't have warehousing, shipping, returns, paper, or printing costs.

Second, stop trying to be the one stop shop for all things fantasy.  This issue contained 84 pages.  By my count, 26.5 of them were fiction, with words from the story on the page.  Each story had a full page illustration (not included in the previous page count), plus there were several pages of ads scattered among the fiction.  There was more nonfiction relating to fantasy in this issue than there was fantasy itself.  I can't speak for most readers, but I never bought RoF for the reviews or columns.  I bought it for the fiction.  With less than half of the contents being fiction, even taking ads into account, it doesn't seem like a good buy for the money.  The nonfiction columns, such as "Folkroots" or art features, are fine, but really, do we need 15 pages reviewing games, books (3 columns: general fantasy, urban fantasy, and YA), plus graphic novels?  This issue was typical of most I've seen.  Decide what you want the magazine to focus on, fiction or reviews, then do that better than your competition.  Don't try to be all things to all people.

Finally, get a new editorial team.  Shawna McCarthy has been the editor of the magazine since its inception.  Every time the publication has been sold, the new owners have kept her on.  While I don't question her credentials, I have reservations about her taste in fantasy.  The stories all seem to be about the same.  One of the commentators on the Black Gate post about the closing of the magazine called it chick-lit fantasy.  I'd have to agree.  The primary content seems to be about the emotional lives of women, with fantasy elements thrown in.

I realize there are a number of people who like that type of fantasy, not all of  them women.  But it doesn't seem to be a successful formula commercially.  If it were, why does it keep failing.  I have no problem with one of the stories in each issue being in this vein, and while it's not my preferred subgenre of fantasy, I do read widely enough that I would read, and possibly enjoy, something along these lines if there were plenty of variety to go along with it.  There's virtually no sword and sorcery in RoF, and what little I've seen this past year has been marginally S&S.  And while I don't think each issue should be only S&S either, I do think there should be a great deal more adventure oriented fantasy in the magazine.

To sum up, the final issue, with the exception of the Carter story, was nothing particularly outstanding.  Writing that sentence gives me no pleasure, nor does the fact that the magazine has failed again.  I do hope someone will bring it back.  I think it could survive, given a change of emphasis and direction, especially if published as an e-mag.
Posted by Adventuresfantastic at 11:39 PM