This is going to be brief, in part because Damon Sasser did a thorough write-up on this crime last year, and I see no need to repeat what he said.  Also, Damon quoted from one of Robert E. Howard's letter describing the crime.  Instead, I'll provide a brief summary of what happened and then get into why I was reminded of this.

In short, four men robbed the First National Bank in Cisco, Texas on Friday, December 23, 1927.  The men were Marshall Ratliff, Henry Helms, Robert Hill, and Helm's brother-in-law, Louis E. Davis.  The men started from Wichita Falls, in Northwest Texas.  They chose the bank in Cisco because Ratliff's mother once ran a cafe there, and he knew the city.  To keep from being recognized, Ratliff wore a Santa suit into the bank.

Things went wrong from the get-go.  The end result was 14 causulties, including 6 fatalies, three people (all children or teens) kidnapped, two gun battles, and the first manhunt from the air in the state.  Davis died of his wounds received in the first gun battle, Helms went to the electric chair, and Ratliff was lynched after killing a deputy sheriff in an attempted jail break.

The whole thing almost reads like a movie script, one with equal measures of drama and comedy, especially if the Keystone Kops are involved.  It amazes me that law enforcement couldn't catch wounded men driving on the rims because the tires have been shot out.  Twice, the second time ending in a chase on foot.  Two of the three crooks still on the loose got away; Ratliff was wounded in the leg and captured. The photo below shows the posse after capturing Hill and Helms in Graham.  Hill is the man in the front row to the right of center with his arm in his dark coat; Helms is the man on his left looking down. 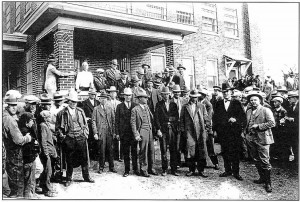 The competency of the bank robbers wasn't much better.  Ratliff was mobbed by children who thought he was Santa as he walked to the bank.  The robbers had to abandon the getaway car shortly after leaving the scene of the crime because they didn't think to check the fuel level before the robbery and ran out of gas.  They were so intent on transferring their hostages to the next car that they forgot to transfer the money and left it in the original car.  Getting turned around in the dark after spending the night hiding in the country, they drove back into Cisco to steal another car (one the police wouldn't be looking for) thinking they were driving into Breckenridge.  The two remaining robbers surrendered in Graham; they hadn't eaten in days and were too weak to resist.  The whole thing sounds like one of Donald E. Westlake's caper novels.

To get full details, read Damon's post or see Gangster Tour of Texas by T. Lindsay Baker (filled with photos and maps) or A. C. Greene's  The Santa Claus Bank Robbery for further details.  The Baker book is a tour book of gangster sties in Texas.  The bank in Cisco still exists, although it's in a different location.  Other than the site of the first Hilton hotel (yes, that Hilton), the bank robbery is Cisco's only real claim to fame. 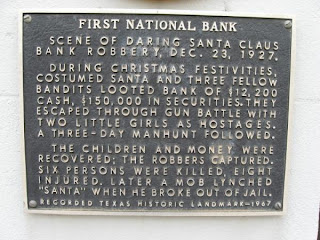 The reason I'm bringing this crime up is because on Christmas Eve 1950, a highly fictionalized dramatization of the story with the title "Christmas Present" was broadcast on Tales of the Texas Rangers, a Dragnet-style radio program.  I heard it rerun the other day on satellite radio while driving my son to meet his grandparents.

The show took great liberties with the story, moving the story to 1931 and reducing the number of bank robbers to two men and one woman accomplice.  Both of the men wore Santa suits and pretended to be charity bell ringers, with one relieving the other.  The story also introduced a poverty stricken man who had been duped into renting the Santa suits in order to raise money to give his children a Christmas.  The thieves are caught with old fashioned detective work, with not a single shot being fired.

As a detective story told with the limits of radio, it was pretty good, even if it didn't have much resemblance to the facts.  One of the consultants on the show was Manuel T. "Lone Wolf" Gonzaullas.  Gonzaullas was one of the Rangers in the (unsuccessful) plane search for the bank robbers in the original crime.  My last installment of this series focused on a Texas Ranger, so I'll save Gonzaullas for another time.
Posted by Adventuresfantastic at 7:12 PM