Blogging Conan: The People of the Black Circle 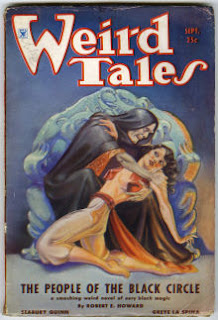 along with "Beyond the Black River".  The other two stories, "The Tower of the Elephant" and "Red Nails" are in The Best of Robert E. Howard Volume 2: Grim Lands

.  We'll look at all of them before this series is over.

It's one of the longer Conan tales.  The story opens, as do many of the best of Howard's work featuring Conan, with characters other than the Cimmerian, something we've discussed in other posts in this series.  In this case it's the king of Vendhya, who is dying from some sort of supernatural afflication.  At his side are various slave girls (who seem to serve no other function than to cringe), a priest, and his sister Yasmina.  Waiting in another part of the city for the king to die are the nobleman Kerim Shah, who is working for the king of Turan to destablize the country, and a man name Khemsa.  He's an acolyte the Black Seers of Yimsha, who are behind the supernatural assault on the king.  Before he dies, the king manages to tell Yasmina who is responsible for his death.

Conan appears later, when Yasmina has assumed the throne and vowed vengeance on the Black Seers.

The scene now shifts to a citadel outside a town on the border where seven raiders are being held prisoner.  Their captain, a foreigner named Conan, has demanded their release.  The deadline he has given is the next morning.  The commander of the citadel is writing a letter to the queen, telling her of the situation, when he has an unexpected visitor, the Queen herself.  She's arrived secretly with a plan to use the prisoners as leverage to force Conan to destroy the Black Seers.  She tells the commander all this and retires to her chambers for the night.  Shortly afterwards, Conan climbs through the window of the commander's chamber and demands the release of the prisoners.  It's something of a face-off until Yasmina walks in unexpectedly.  She had seen Kerim Shah in the city, and suspicious of his presence, wanted to warn the commander about him.  Instead, she's taken hostage by Conan, who flees out the window and into the night with her.  His intention is to use her to force the release of his men

And that's when things take off.  Conan flees with Yasmina.  Khemsa, who is in love with Yasmina's maid, allows himself to be talked into betraying his masters, the Black Seers, and try to make a power grab himself.  To do this, they magically kill the prisoners Conan came to free.  And Kerim Shah strikes out on his own to accomplish his mission.  And this is where you have to go and read the story for yourself if you haven't already.

There are some truly creepy passages when Conan is in the citadel of the Black Circle.  By this time, Yasmina is their prisoner, and he's trying to get her back.  If snakes give you the creeps, then this portion of the story will make your skin crawl.  Some of Howard's best writing, in any of his work, is here inside the citadel, where Conan and his companions fight the members of the Black Circle.

In the end all of the political subplots are tied up nicely.  Conan wants Yasmina to go with him and share a life of robbery.  This in my opinion was one of the time Howard handled a female character with depth and subtly.

Rusty Burke said the purpose of The Best of Robert E. Howard was to give readers, particularly readers who weren't familiar with the breadth and depth of Howard's work, a chance to see just how versatile a writer he was.  Because of that, there were limits on how many stories could feature series characters, such as Kull, Conan, and Solomon Kane.  It's easy to see why "The People of the Black Circle" made the cut.
Posted by Adventuresfantastic at 10:08 PM