Blown Away by the Winds of Khalakovo 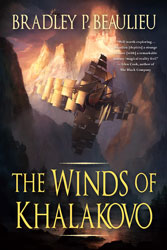 If there is any justice in this world whatsoever, this book will be short-listed on next year's Hugo ballot.

This one has it all:  flying ships, magic, mystery, dark secrets, buckets of intrigue (both familial and political), honor, revenge, sea serpents, selfless sacrifice, a wedding dance that's just short of combat, assassinations, ship eating squids, and after a fashion, unrequited love. Lifelong friends will become bitter enemies; bitter enemies will become staunch allies.  And for all involved, everything will change.

So what's the book really about, you say?  I'm glad you asked that.

Here's the situation and the principle players:

Dark times have fallen on the Grand Duchy of Anuskaya.  The blight is moving through the Duchy, resulting in fewer catches, blighted crops, a disease called the wasting, and death.  The duchies are scattered on archipelagos.  Sea travel is rather dangerous due to the aforementioned sea serpents and squid.  Travel of any distance is conducted by air.

And that's where the magic system comes in.  There are five types of spirits which can be controlled:  earth, fire, air, water, and the spirit of life.  This is done through different stones.  Controlling spirits of air is essentially how the ships fly, although it's a little more complicated than that.  Also, the women of the duchies, some of them at least, can travel through a type of astral projection.  They are losing this ability because of the blight.

The key players in this drama are Prince Nikandr, the youngest son of the Duke and Duchess of Khalakovo.  He's betrothed to be wed to Princess Atiana, daughter of the Duke and Duchess of Vostroma.  There are two problems with this.  First, he and Atiana have known each from childhood, when she and her sisters played tricks on him and their brother.  His memories do not reassure him when he thinks of his future.  Second, he's in love with an Arahman woman named Rehada.  The course of true love never did run smooth.

Atiana isn't any more thrilled with the marriage than Nikandr is.  It's a marriage of political convenience, to seal an agreement between the duchies of Khalakovo and Vostroma.  Yet Atiana wants more than the marriages she sees her mother and sisters having.  She wants to stand with Nikandr, and it doesn't take long before she begins to genuinely love him.  The course of true love, yadda, yadda, yadda.

Then there's Rehada, who is secretly Maharraht.  Her mission is to get close to the Landed, particularly Prince Nikandr, and gain information that will be useful in the coming uprising.  Only she never planned on falling in love with Nikandr.  The course of true love...you know the rest.

Add to this mix Ashan, an Aramahn who is one of the rare masters of all magical disciplines and a young boy named Nasim who is much more than he seems, along with the leader of the Maharraht and father of Rehada's deceased daughter, Soroush, and you have an explosive mix.

And explode it does.  Literally in places.  The book moves at a breakneck pace, even when Beaulieu is setting up things to come.  He made a dance at one of the wedding events seem suspenseful, which is a real trick since that type of thing tends to be what I skip over.  The characters are multi-layered and deep.  They change and grow, not always for the better, but no one is the same person at the end of the book as they were at the beginning.  I'm speaking of those who survive, of course.  Not everyone will, which makes the suspense more real.

Lest you think I'm in the employ of Mr. Beaulieu, there are a few places where the first novel aspect of this book shows.  Only one was of major consequence.  Early in the story, after Nikandr and Atiana have danced, they go for a moonlit ride away from the castle, where he tells her he has the wasting.  Offended that he had kept such an important thing secret, she returns to the castle in a huff.  He tethers his horse to a tree (he's on foot at this point), walks a short distance away, and then dismounts.  Without ever getting back on his horse.  A minor thing, but it threw me completely out of the story.  Fortunately, what happened next pulled me right back in.  Read it for yourself cause I'm not gonna tell ya.

If I had to pick a theme for the novel, I'd say it's the damage that pride causes.  There's a scene where Nikandr, Ashan, and Nasim are exploring a city on an island that was destroyed centuries before.  When Kikandr asks Ashan what caused the destruction, he replies:  "Hubris".  That's the driving force in almost all the conflict right there.  Most of the dukes and their offspring have hubris to spare.  In buckets.

And not just the men.  The women are just as guilty.  This society is somewhat matriarchal in that only the women can do the astral projection thing.  They can communicate with each other and see what's happening great distances away.  They don't always have the same goals as the men, and even when they do, their methods are often quite different.  Only Nikandr's sister-in-law Yvanna shows any sign of being a weeping wallflower, and even that's only partial.  All the rest of the women are tough, smart, strong, and not to be trifled with.

This was a fantastic book.  I've been fortunate so far in that most of the books I've selected to review here have been good.  There have been a few that I've not really liked, but over all, the past year I've been blogging has been one of the best for reading I've had in a long time.  The Winds of Khalakovo has been one of the top two or three.  Read it for yourself and you'll understand what I mean.
Posted by Adventuresfantastic at 11:09 PM