A Look Back: Black Gate 3 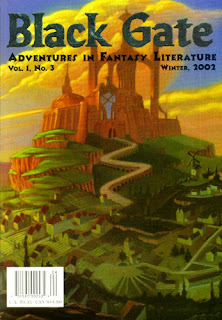 This is the first of an occasional series, in which I'll look back at an issue of a magazine from some years ago.  I'm not sure how far back these looks will extend.  I'd like to restrict myself to things that most of you can find without too much difficulty or expense.  For that reason, I don't know if I'll include pulps.  What I won't focus on in this series is anything that is currently available for free online.  While Beneath Ceaseless Skies and Heroic Fantasy Quarterly are venues I enjoy and will from time to time take a look at, they won't be part of this series.

I decided to start this series with Black Gate 3, Winter 2002 because I like this publication.  It's published some great fiction over the years by people who have gone on to have successful careers.  I can't think of a single issue that hasn't been a winner.  By the third issue, BG was beginning to hit its stride and had developed a clear editorial style.

Let's take a look at what this issue holds.

First of all, there isn't as much fiction as in recent issues, because at this time BG was on a more frequent publication schedule.  It was only after the magazine went to annual issues that the page count increased.  BG 3 clocks in at 224 pages, with approximately 150 pages of fiction and accompanying illustrations, the rest being devoted reviews and articles, the ToC, an ad for subscriptions, and an editorial.  There are eleven stories, and ten of the worked for me.  That's a pretty good ratio.

The lead piece of fiction is "Iron Joan" by ElizaBeth Gilligan.  This is a story about a woman whose inner strength is more than a match for several men who attempt to treat her badly.   In the process she wins the respect of the town where she's come to live.

Elaine Cunningham tells of the first meeting of Oberon and Lancelot in "The Knight of the Lake" and shows that you're never to old to learn something new.  The Faery Court and Camelot have been somewhat overdone through the years, but this is a fresh and entertaining take on some familiar characters.


Veteran author Mike Resnick provides an entertaining glimpse into the life of John Justin Mallory, hero of Stalking the Unicorn

with "The Chinese Sandman".  In this one, Mallory has to retrieve an artifact from his old nemesis, the Grundy, in order to meet the Sandman's price for returning a dream to his partner.

Harry James Connolly, who has since gone on to publish several novels as Harry Connolly (link to the first shown), returns from the second issue with another story set in the city of Pald.  "Another Man's Burden" is a heartbreaking tale of what happens when we try to realize our dreams by any means possible.
In "A Taste of Summer", Ellen Klages (Portable Childhoods

) tells the story of a young girl and a very special ice cream shop.  This one was highly reminiscent of Ray Bradbury's Green Town stories, and it took me back to the summers of my childhood, depsite the fact they weren't much like the one in the story.  Of all the stories in the issue, this one moved me the most.
Darrell Schweitzer's "A Dark Miracle" is set in colonial America and concerns the dark events of one winter night, a night that will haunt a man for the rest of his days.
"Tav-Ru's Troth" reveals the depths some are willing to sink to in order to achieve love.  Unfortunately, love gained under those circumstances rarely lasts.  A dark and disturbing tale, and one of the better ones in the issue.
Jon Hansen spends "Three Nights in Big Rock City" to provide the second humorous detective story.  He also reveals a clever way to cheat at the craps table, although I don't recommend trying it.  The results can be quite devastating if you're found out.
The issue ventures into science fiction, with Todd McAulty's "The Haunting of Cold Harbor", about a serious (and rather grim) mystery set in a fantasy virtual reality game.  It's one of the longer stories in this issue.  I also want to play the game.  The world here seems like a lot of fun.
The other long piece is the classic reprint, "Ringard and Dendra" from Brian McNaughton's The Throne of Bones. I'd picked up TToB at a book sale a few years ago but never got around to reading it.  I will now.  This was a horrifying little gem of a story within a story.  The fact that at least one of the endings is predictable only adds to the mounting sense of dread rather than detract from it.

Completely opposite was Gail Sproule's "For Love of Katie", which rounded out the issue.  This one is told from the point of view of a small dragon-like creature produced in a genetics lab.  Telling a story from an animal's point of view is a hard trick to pull off and few authors can, which is why I generally don't care for that type of story.  Unfortunately, the author didn't quite succeed, at least to my satisfaction.  This one was a little too cute and predictable for my taste.  Still it was well written and I'm sure there are plenty of people who would enjoy it.

All in all, BG 3 is a solid issue, with a great deal of exciting fiction to recommend it.  There's something here for everyone.  From sword and sorcery to near contemporary to futuristic, from quiet and thoughtful to humorous to horrifying. You can't go wrong.  And although they may disagree with me, it's fun to see some of the early efforts of some of the rising stars of the genres

This issue of Black Gate is still available.  If you don't have a copy and would like to pick one up, you can order here.  It's one of the first, so I don't know how many are left.  There's a back-issue sale going on, so you can probably score some good deals.  If you don't wait too long.
Posted by Adventuresfantastic at 10:11 PM