What I Think of Conan the Momoan

I said in my post last Friday that I thought Conan the Barbarian was a semi-decent movie.  Now that things seem to be slowing down a little and I have time to write, I need to define that term.  Simply put, "decent" means not good but not particularly bad, either.  "Semi" means not even that good.

The problem, as more people than I'm going to try to link to have said, is that the movie simply doesn't deliver in terms of story.  There are just too many holes in the internal logic.  I'll discuss the things that stuck out to me, but first I'll discuss why this character isn't Conan as written by Robert E. Howard.

There were a couple of attempts to tie this movie to what Howard wrote.  Some of the initial lines narrated by Morgan Freeman in the opening were quotes from Howard.  One of the characters summarizes the events of "The Tower of the Elephant" in about one sentence when he's bragging about Conan's exploits.  Then there's the famous quote, "I live...I love...I slay, and I am content" that was taken completely out of context and not even quoted correctly.  The actual quote is from "The Queen of the Black Coast" and is "I live, I burn with life, I love, I slay, and am content."  Beyond that, there's nothing directly from Robert E. Howard in the film.

The argument to counter this criticism is that the film captures the spirit of the Conan stories.  But even there the film falls short.  I won't rehash the origin story criticisms.  Others have said it better than I.  Nor will I get into the depiction of Conan as a crusader against slavery.  There's no point in throwing stones at the fight choreography.  In this type of movie, the If-I-Did-This-In-A-Real-Fight-I'd-Be-Gutted school of combat is almost unavoidable.  Instead I'll point out a few lapses in logic that others seem to have missed.

First, Tamara.  She seems to be the only one of the female monks who has any idea how to fight, and she's quite accomplished at it.  Why?  Is she unique in her interests and abilities in this area, or was she singled out for special training?  If she was, what explanation was given to her and the rest of the monks?

If Tamara's such a great fighter, and tells Conan that she won't go with him after he rescues her, why is she docilely accepting being tied up in the next scene and at no time trying to escape?  Is she into bondage?  The sex scene didn't indicate she was, but maybe that was too racy for the R rating.  Nah.  Probably not.

In the final fight scene, Tamara falls through a bridge of wooden slats.  She has a chain on her wrist, and Conan catches the chain to save her.  The distance she falls before he catches her is enough to dislocate her shoulder if not tear her arm off.  She isn't even bruised.  That's pushing things a little too far.

Last gripe about Tamara.  If she was supposed to fill the role of Belit in this film (it was Belit the above quote was spoken to), why does he ride off and leave her in the end?  Belit was the one great love of Conan's life.  There was no real reason for him to leave her.  Except maybe that since he'd bedded her, it was time for new conquests.  And he would never do that to Belit.

I can't buy Conan deliberately allowing himself to be taken prisoner in order to get close to one of the men he's after.  My memory may be misleading me, but I don't recall Conan ever doing anything like that.  I do remember more than once him threatening to kill anyone who laid a hand on him.

When Tamara is kidnapped from the ship, why wasn't there a man on watch?  Robert E. Howard's Conan would never be so stupid as overlook a thing like that.  And earlier, when Khalar Zim first tries to kidnap her, don't any of these people realize they're coming.  Khalar Zim has a land ship pulled by eight elephants, fer cryin' out loud.

I didn't buy the scene where young Conan fights and kills the Picts early on, either.  Not while holding an egg in his mouth.

On the other hand, there were some things I liked about the movie.  The fight scene with the sand demons was exciting and (I thought) genuinely suspenseful.  Of all the scenes, I thought this one best captured the spirit of Robert E. Howard, at least until he defeats the sand demons and fights Khalar Zim directly.  Too bad more of the others didn't.

I don't have any major gripes about the sets and the cast, although I know some people do.  Jason Momoa did a much better job as Conan than I expected him to.  I can see him playing this role again.  I only hope he gets to, and in a film that's actually based on Howard's work.  Unfortunately, the movie is doing so poorly that it will probably kill any chance for a genuine Howard adaptation for another generation.

One final thought.  The makeup Rose McGowan wore as Marique placed an image in my head that I can't get out, so I'm going to share it with you.  Her hair reminded me of Londo Mollari from Babylon 5, while the spots on her neck and forehead made me think of Dax from Star Trek:  Deep Space Nine.  If those two ever had a love child, Marique is what she would look like. 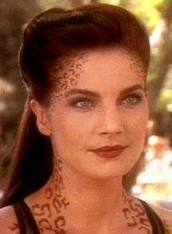 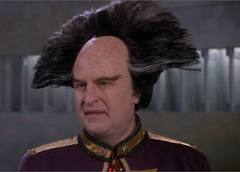 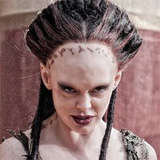 Posted by Adventuresfantastic at 9:56 PM