Blogging Conan: A Witch Shall be Born 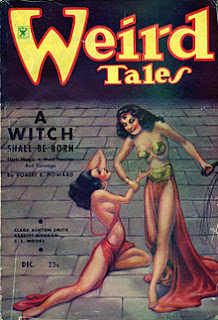 It's been hectic the last few weeks.  I just finished two back to back conferences at which I made presentations and will fly home tomorrow.  As a result, I've not posted much other than a review at Futures Past and Present of a Jack Vance novel I read on the plane.  Things should start to pick back up.
"A Witch Shall be Born", although not without flaws,  inspired the Margaret Brundage cover seen on the left.  This is one of my favorite Conan stories, even with the flaws.  Some of the strongest imagery in the whole series can be found in this story.  Also some of the most unbelievable protrayals of women.
The story opens as Taramis, the queen of the small city state Khauran, is awakened during the night.  She had a twin sister at birth, Salome, who was left to die in the desert.  A curse lies on the royal family of Khauran, so that every century a child is born with a cresecent shaped birthmark on her chest.  The child will become a witch and do much damage to the kingdom.  When Taramis and Salome were born, Salome had the mirthmark and was left in the desert to die.  Found by an eastern sorcerer returning home from a visit to Stygia, she was raised to become a powerful sorceress.  Now she's come back to take what she claims is her birthright.
How she can speak the language without any accent is never addressed, which was something of a stumbling block for me.
With Salome is a mercenary captain named Constantius.  He had entered the city a few days ahead of Salome and had publicly proposed marriage to Taramis.  She of course rejected his proposal.  Constantius joins Salome.  After a brief discussion, in which Salome reveals that she intends to take Taramis' place, she goes to declare herself queen, leaving Taramis to be raped by Constantius.
She orders all the soldiers to assemble in the city's central square unarmed.  They all do, except for the Queen's guard, who are led by a certain Cimmerian.  They show up armed.  Conan doesn't fall for the trap.  Instead he declares Salome an imposter.  The Queen's guard are butchered, and Conan is crucified by Constantius outside the city gates.
One of the guard escapes, a young man named Valerius, whose devotion to the queen comes across as though he's in love with her.  His lover Ivga tolerates this.  Why, I don't know.  He clearly cares more for the queen than he does for her.  Ivga comes across as child-like, the way Muriela did in "The Servants of Bit-Yakin".  This was the other portrayal I thought was unrealistic.
Still, this is a better than average story.  One of the things that Howard does is to tell the story from the viewpoints of Taramis, Salome, and Valerius as much as from Conan's viewpoint, if not more.  In fact, we don't actually get a passage from Conan's viewpoint until the crucifixion scene.  A variation of this scene, by the way, was in Conan the Barbarian, starring Arnold Schwarzenegger.  While this approach does lend itself to some infodumps, it has the advantage of defining Conan's character through the eyes of others.  One thing I thought interesting was how Conan treated Taramis.  I'll not elaborate on that, at least not in this post, since I'm trying not to give too many spoilers away.
There's plenty of action and intrigue, with touches of the civilization vs. barbarism theme Howard included in many of the Conan works.  The crucifixions are especially well done, and the images I Howard's words formed in my mind the first time I read this story are still with me, a quarter of a century later.  This one is worth checking out.
Posted by Adventuresfantastic at 9:46 PM